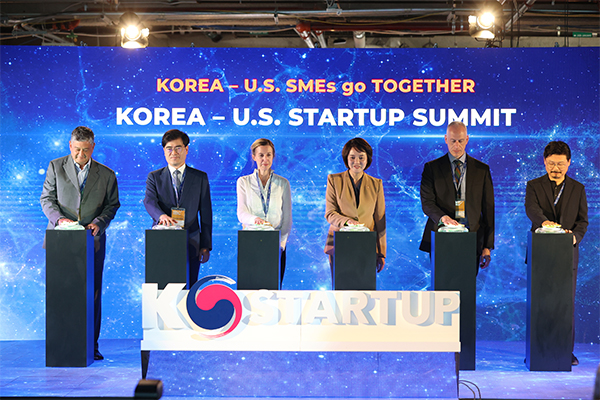 [Photo provided by Ministry of SMEs and Startups]

South Korean government-invested venture fund and a group of U.S. venture capital will launch a joint funds of fund worth $215 million to back global competitiveness of Korean startups.

According to the Ministry of SMEs and Startups on Wednesday (local time), the Korea Fund of Funds (KFoF), a venture capital sponsored by state-invested Korea Venture Investment Corp. (KVIC), and three venture U.S. capital have agreed on the joint fund. KFoF will put up about 14 percent of the fund.

The joint fund is expected to facilitate Korean startups network with global venture capitalists in bigger fund-raising. “We are discussing the design of the fund. We will create an ecosystem in New York’s Silicon Alley to build a gateway for Korean startups to go global,” said Lee Young, Minister of SMEs and Startups.

Bhatia vowed to make success stories with Korean startups and asked for government support to enable blossoming of ideas and flexibility from startups.

Oracle will be running a startup nurturing program with the Korean government next year to share knowhow on management and technology. Oracle plans to support 20 Koran startups in the AI and cloud fields.

Lee said that the ministry would seek to enhance the cooperation between the government, large companies, and startups. The government will expand exchanges with other countries to help startups. Efforts are under progress with Arab nations.

By Yang Yeon-ho and Jenny Lee