S. Korea assures it has enough vaccines to achieve herd immunity by November 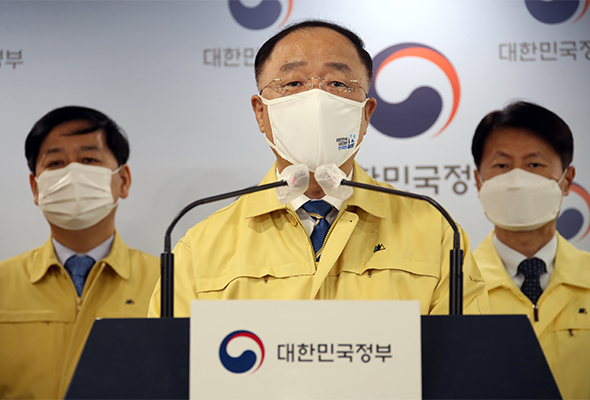 The South Korean government on Monday tried to mitigate public anxiety over the slow progress in vaccine program and assured it has secured more than enough vaccines for the entire population to achieve Covid-19 herd immunity by November.

Acting Prime Minister Hong Nam-ki said in a public message on Monday that the government has secured vaccines totaling 192 million doses for 99 million people after its additional purchase agreement with Pfizer for 20 million people.

“The amount is almost double the country’s population and nearly triple that of the inoculation target of 36 million people to achieve herd immunity,” Hong said.

Although Korea had procured enough vaccines to reach herd immunity by November – 152 million doses for 79 million people -, the latest additional purchase from Pfizer will be extra security, he added.

Korea will be able to preemptively respond to additional vaccine demand such as booster shots for variant virus and more shots for those under the age of 18, he said.

The government will make sure that 36 million people, or 70 percent of the population, receive their first jabs by the end of September,

He also addressed public jitters over vaccine safety and effect.

He mentioned that based on an analysis of inoculation effect on those aged over 75, AstraZeneca vaccines are proved to be 100 percent effective and Pfizer 93.2 percent. The government is also strictly monitoring any side effects and that vowed the government will be responsible for any causal damage.

The public message came as the number of daily virus cases in Korea has surged to near 800 last week marking the highest since January on cluster infections in daily locations and through family gatherings. Korea reported 500 more cases Monday. Vaccination is at 4 percent, whereas the rate is 62 percent in Israel and 41 percent in the U.S.