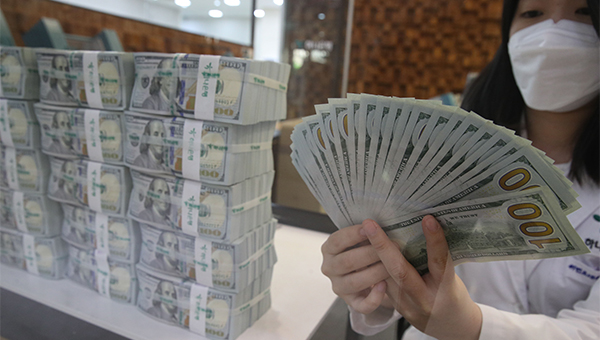 According to the Bank of Korea (BOK) on Wednesday, Korea’s forex reserves came at $438.61 billion in July, up $330 million from the previous month after a sharp on-month contraction of $9.4 billion in June.

The BOK admitted dollar-selling intervention to ease volatility in the foreign exchange market led to the sharp loss in FX reserve in June. The country’s FX reserve shrank for four straight months till June, timed with the U.S. dollar strengthening to above 1,300 won. 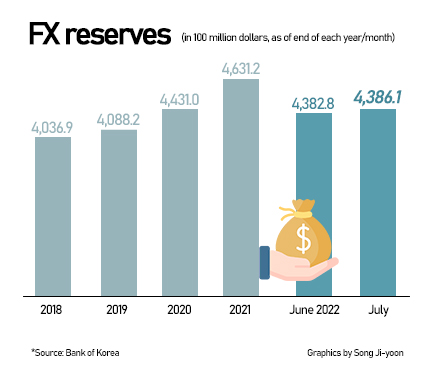 이미지 확대
Last month’s gain was due to an increase in income from forex investments and financial institutions, the central bank said.

By asset type, securities including government and corporate bonds were down by $3.42 billion on month to $391.85 billion in July, whereas deposits added $3.98 billion to $23.2 billion. The special drawing rights from the International Monetary Fund (IMF) rose $170 million to $14.39 billion.

Gold holdings were unchanged at $4.79 billion from a month earlier as its value is recorded at purchase prices.

As of the end of June, Korea held the ninth biggest FX riches. China was the largest with $3.07 trillion, followed by Japan with $1.35 trillion and Switzerland with $962.5 billion. Russia ranked fifth, holding $584.1 billion in forex reserves.