이미지 확대
South Korea’s private-sector debt has come to double the nominal gross domestic product (GDP) by the end of March as household and corporate debt surged since the outbreak of the coronavrius, according to data compiling by the Bank of Korea.

Household debt reached 1,611 trillion won ($1.3 trillion) as of end of March, up 4.6 percent from the same period a year ago. The gain was mainly led by a 5.7 percent increase in mortgage-backed loans. The ratio against disposable asset reached historic high of 163.1 percent by March, up from 158.6 percent three months ago.

“Debt servicing capacity by households could further deteriorate going forward as conditions have worsened from the spread of COVID-19,” the BOK said in the report.

The country’s private credit debt against nominal GDP reached 201.1 percent at the end of the first quarter, up 12.3 percentage points from the same period a year ago. It is the first time the ratio reached over 200 percent.

The BOK said that banks remain sound despite borrowing expansion.

Data showed that lenders’ non-performing loan ratio reached 0.46 percent as of end of the first quarter, down 0.09 percentage point from the same period last year. Total capital ratio was lower than last year at 15.3 percent based on Basel III standard, but banks are under control, BOK noted.

The central bank also said that the country’s financial system will be able to remain stable throughout given various measures and recovery capacity of financial institutions.

The BOK advised that policymakers should ready preemptive countermeasures to prevent systematic risks such as weakened financial intermediation due to large-scale losses of financial institutions.

The BOK plans to enhance real-time monitoring of risk at home and abroad and play aggressive role in the advent of serious credit crunch.

The central bank projected Korean companies would be 54 trillion won liquidty-short if the economic fallout from the coronavirus crisis prolongs throughout the year.

The airline industry will be hit hardest with credit shortfall reaching 12.7 trillion won. The BOK expected financial soundness to worsen with half of the air carriers not being able to cover interest payment with this year’s profit.

Under the worst-case scenario, companies in accommodation and food sector, leisure service, and shipping industry will also suffer from liquidity shortage.

The BOK expected companies to be in need of up to 30.9 trillion won under milder scenario where coronavirus fallouts last until the second quarter of this year. 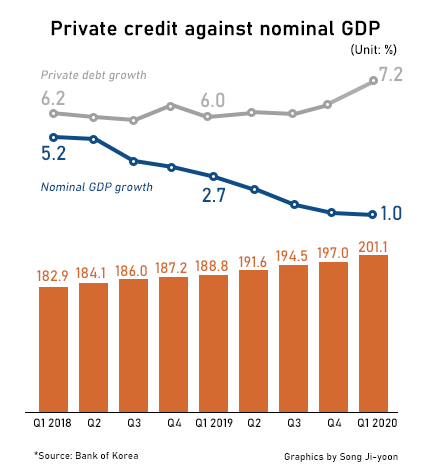 The BOK noted that current corporate cash shortage isn’t related to structural issues but is temporary stemming from COVID-19 shock. It underscored the need of preventing large-scale insolvency through funding support, particularly in vulnerable industries, by enhancing monitoring on cash conditions and stabilizing commercial paper and corporate bond markets.