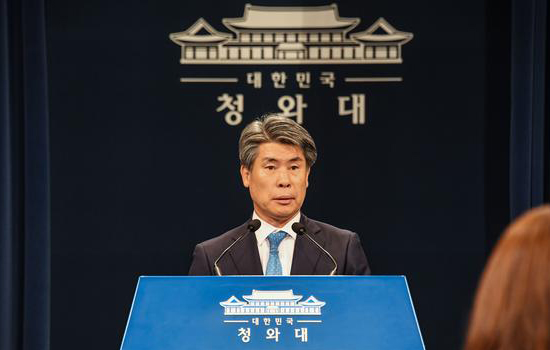 The South Korean government for the first time admitted external uncertainties and downside risks to the exports-reliant economy could drag on longer and do greater harm than expected and pitched harder for fiscal expansion.

“External uncertainty has grown greater than we had expected at the beginning of the year,” Yoon Jong-won, senior presidential secretary for economic affairs told reporters in a briefing on Friday.

“We now have to consider the possibility of prolongation in downside risks,” he said.

The president and Blue House so far remained upbeat despite the 0.4 percent contraction in the first-quarter economy, citing strong fundamentals, and predicted recovery from the second half.

“Given the increased downside risk to the economy and slowing global economy, more aggressive policy actions are necessary,” Yoon said.

The Blue House and government have lately turned vocal on a stronger fiscal role to bolster the economy.

The Korean government has proposed a rare early-year supplementary budget of 6.7 trillion won ($6 billion), on top of its super-sized spending plan for this year to prop up the economy, but this also has raised concerns for damaging the country’s fiscal soundness from higher debt.

Yoon shrugged off concerns about the country’s fiscal health emphasizing that Korea’s debt-to-gross domestic product (GDP) came down to 35.9 percent from 38.2 percent after the nominal GDP was revised up by 111 trillion won. The Bank of Korea released revised GDP data last week upon resetting the base year for the country’s national account balance.

“The gain in GDP has given the government room to maneuver more aggressively,” said Yoon.

He asserted that the country’s current account will swing to surplus in May and projected it would continue to stay in the black. “Exports based on volume have been growing steadily while the outbound shipments of electric cars, secondary batteries, and bio/health products are rising sharply,” said Yoon, adding “There is a room for improvement.”

By Oh Soo-hyun and Cho Jeehyun