The number of import restrictions imposed on South Korean goods reached a record high in 2020 amid growing protectionist trends, especially in emerging markets that foster the growth of the manufacturing sector to drive their economy.

According to a report released by the Korea Trade-Investment Promotion Agency (KOTRA) on Thursday, 26 countries slapped a total of 228 curbs on imports from Korea as of the end of last year.

The measures included anti-dumping duties, countervailing measures and safeguard tariffs as well as cases under investigation.

In the second half of last year, nine countries newly initiated 18 investigations on imports from Korea.

Asia’s fourth largest economy faced 164 anti-dumping measures as of the end of 2020, which accounted for 72 percent of the entire restrictions, with the number of safeguard cases reaching 54, or 24 percent, and countervailing duties 10, or 4 percent. 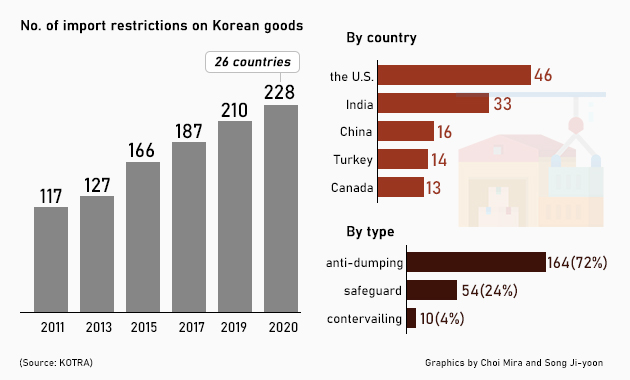 Emerging markets such as India, the Philippines and Thailand slapped a combined 151 restrictions, accounting for 66 percent of the total.

By product, steel and metals were subject to the highest number of 110 restrictions, followed by chemicals with 53, amid the emerging economies’ state initiatives to nurture domestic manufacturing industry.

There were 19 restrictions on Korean plastics and rubbers, 17 on textiles, 8 on electric and electronics and 1 on machinery.

Non-tariff barriers such as import licensing were also rising in countries such as India, Indonesia, Malaysia, Argentina, Thailand and the Philippines.

KOTRA predicted trade partners will impose higher trade barriers this year as they strive to secure leadership in the green and digital industry.