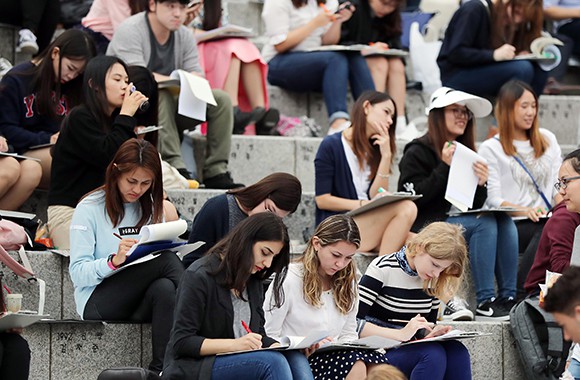 이미지 확대
South Korea has become an alternative higher-education destination for Asians – mostly Chinese and Vietnamese – as the pandemic and lockouts keep them away from English-speaking U.S. and Australian schools.

According to data compiled by the Korean Educational Development Institute on Tuesday, the number of Chinese students enrolled to graduate or doctoral programs in Korea reached 19,827 as of April, up 21 percent from a year earlier. Against four years ago, the number almost doubled.

Demand for graduate education is rising fast among those looking for jobs in China, but the number of available programs is limited in the mainland.

Those who came to Korea for language studies or under student exchange programs from China almost halved to 6,785 as of April due to the virus pandemic, adding financial burden to local universities.

But the number could rise fast from next year as the United States and Japan are mulling curbs on entry of Chinese students amid the ongoing pandemic threats.

Amid a fall in Chinese undergraduate students, those from Vietnam are fast rising at colleges located outside Seoul. Vietnamese students attending undergraduate courses in Korea jumped 54 percent on year to total 16,007 as of April.

By Moon Gwang-min and Lee Ha-yeon