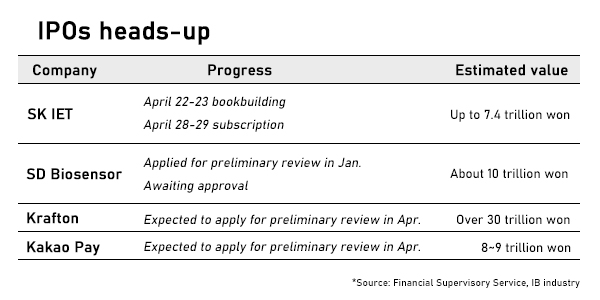 이미지 확대
The second-quarter IPO pipeline from South Korea is set to be the biggest-yet ever as it includes highly-anticipated gaming name Krafton and another Kakao name that usually sits well with investors.

SK IET has set the desired price band at between 78,000 won ($69.9) and 105,000 won, putting the IPO value from 5.56 trillion won to 7.49 trillion won. Given the record response to last month IPO by SK Bioscience, the next contestant from SK family is expected to do equally well in pricing and demand.

Krafton Inc., the developer of battle royale game PlayerUnknown’s Battlegrounds, will be filing for preliminary review for an IPO on the Kospi bourse this month. The company with estimated worth of 30 trillion won ($26.9 billion) is expected to embark on IPO process in June as review usually takes 45 working days.

Krafton’s shares hover at 2.345 million won on the over-the-counter market as of Tuesday, compared with 1.8 billion won in mid-March, according to OTC platform Stockplus Unlisted.