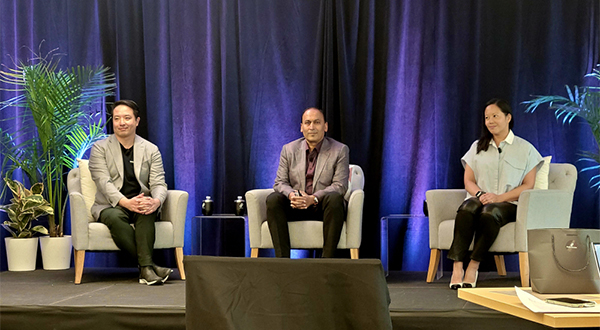 Manish Chandra, chief executive officer of Poshmark Inc., said that the company’s link with Naver Corp. will create new opportunities and make it competitive in the cutthroat secondhand market to become profitable next year.

During a press conference held in San Francisco last Friday, Chandra told Korean reporters that he has a new target of raising Posh users from millions to billions based on close collaboration with the Korean internet portal giant Naver.

Poshmark is a major secondhand fashion commerce platform in the North American market. On Jan. 6, Naver announced the completion of its acquisition of the U.S. company for $1.3 billion, which is Naver’s single largest investment ever and the biggest acquisition ever by a Korean IT company.

During the conference, Chandra introduced a test version of a new shopping feature called Posh Lens powered by Naver’s Smart Lens technology. Users can use the function to receive a list of similar products available on Posh by taking a picture of an object. Poshmark also plans to incorporate Naver’s live commerce technology into its Posh Show live-streaming feature.

“As a new Naver member, we will use Naver’s powerful technology to improve Poshmark’s overall services, such as marketing, search and community to present a new customer-2-customer trend in the global market,” Chandra said.

Founded in 2011, California-based Poshmark posted an annual gross merchandise volume of $1.8 billion and revenue of $330 million as of 2021. Users can trade new and secondhand clothing and other home goods. It has more than 80 million users and aims to turn to profit next year.

By Lee Sang-duk and Minu Kim