Samsung Elec said to have developed UWB chip to use in flagship devices [Source : Samsung Electronics]

Samsung Electronics Co. has developed its own ultra-wideband (UWB) chip that is considered the next big thing in the mobile communications industry as it provides wireless technology that enables very precise location tracking, according to sources on Wednesday.

Maeil Business Newspaper has exclusively found out that Samsung Electronics invited VIP guests to a closed-door session at the Consumer Electronics Show 2023 in Las Vegas earlier this month. The South Korean tech giant informed them that its System LSI business division has independently developed a UWB chip, under the project name “U100,” sources said.

The release date of the chip is imminent, although Samsung Electronics did not share further details. It’s expected that the product will be applied to a wide range of devices including the Galaxy flagship model this year.

UWB technology is a new technology that can replace Bluetooth and global positioning system (GPS) technologies. It is a short-range wireless communications protocol that operates on high frequency radio signals. UWB has spatial awareness and directivity.

Lars Reger, chief technology officer at UWB chip manufacturer NXP Semiconductors, noted that it takes at least two seconds for location sensing with Bluetooth technology whereas it is 1,000 times faster with UWB. 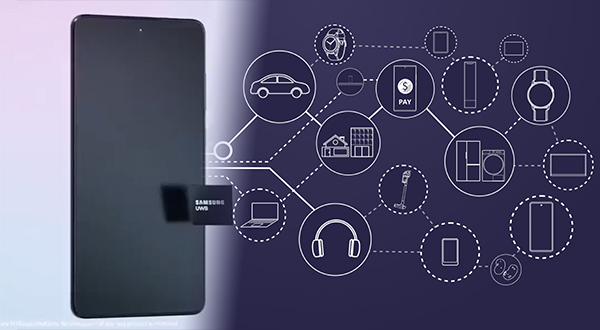 UWB technology is a new technology that can replace Bluetooth and GPS technologies. [Source : Samsung]

Samsung Electronics presented to guests many areas UWB chip can be applied to, mainly location-based service. It can lead to various smart solutions, such as consumers turning on the TV with their smartphone camera using augmented reality technology. It can also help find the location of a car key inside a room by reflecting on the room using a smartphone camera.

UWB is a technology that has been proposed from 70 years ago for military purposes. It was used partly as military radars before commercialization from several years ago. The technology development accelerated after Apple Inc. developed its own U1 chip in 2019. Apple applied a UWB chip to its smartphones from iPhone 11 to introduce related services such as air tag that helps locate objects.

Samsung Electronics has also placed a UWB chip in its flagship models from 2020 starting with Galaxy Note 20 Ultra and Galaxy Z Fold 2. The chips were supplied by NXP.

The UWB chip market is projected to grow rapidly in the coming years.