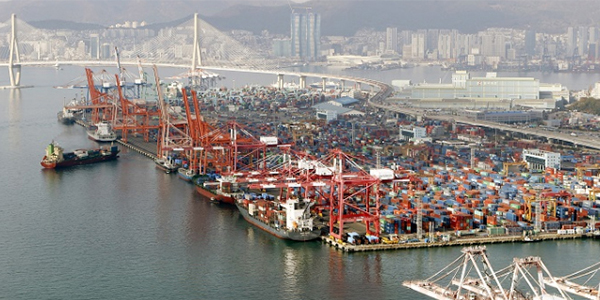 South Korea’s Ministry of Oceans and Fisheries on Friday announced a slew of measures worth about 3 trillion won ($2.1 billion) to prevent the country’s shipping industry from facing another crisis as plunging rates have led to smaller profits.

The Shanghai Containerized Freight Index, which tracks the short-term shipping rates, dropped 67% to 1,698 at the end of October from 5,110 in January. The shipping current account, which makes up for 31% of the country’s service account, is expected to show a sharp decline in surplus this year.

The Korean government has decided to take pre-emptive measures to prevent a possibility of the industry facing another crisis last seen in 2017 when Hanjin Shipping Co. collapsed. The plans are also aimed at achieving its goal for the shipping industry to post a combined revenue of 58 trillion won with a fleet of 120 million tons and shipping capacity of 1.3 million 20-foot containers by 2027.

The government plans to set up an up to 1-trillion won fund with dividends it received from HMM Co. and other resources to help shipping companies restructure and will provide 300 billion won for cash-strapped small- and medium-sized companies.

Korea Ocean Business Corp. plans to invest 1.7 trillion won to add as many as 50 vessels by 2026 to start chartering vessels to domestic shipping companies. This is to help small- and medium-sized companies ensure stable supply of capacity as the shipping industry is one of the country’s key sectors.

The oceans ministry will also start offering this month South Korea’s own weekly container shipping index based on rates in the country. The Shanghai Containerized Freight Index is made up of rates originating from Shanghai and doesn’t adequately reflect the local conditions, the ministry said.

Korea International Trade Association and HMM will sign a long-term shipping contract that will help the country’s small- and medium-sized exporters secure stable source of shipment of their goods.

Cho Seung-hwan, Oceans and Fisheries Minister, said there is no immediate risk to the domestic shipping companies since they have secured sufficient level of cash and liquidities over the last three year but the public will have to bear the possibility of weakening performing during the recession.

By Park Dong-hwan and Kyunghee Park