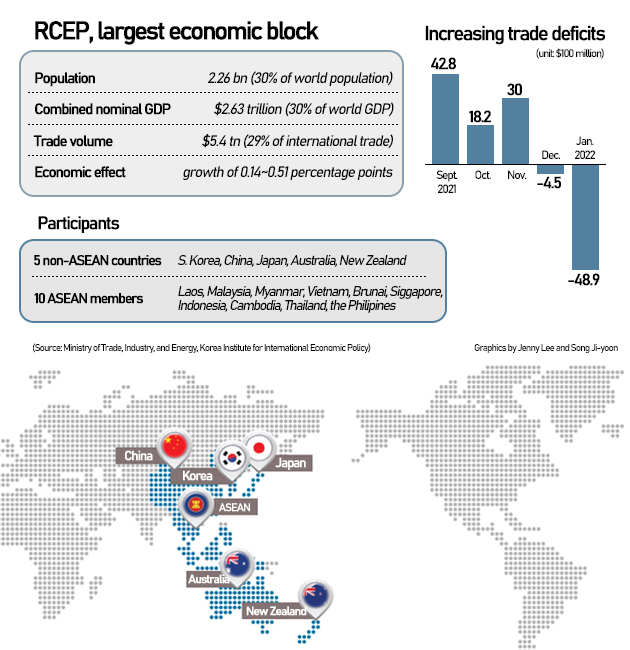 이미지 확대
South Korea’s joining of the Regional Comprehensive Economic Partnership (RCEP) effective from Tuesday is expected to bolster trade with Japan in the first free-trade arrangement with the neighboring No. 2 largest Asian economy as well as Southeast Asia.

The RECP encompassing the three Northeast Asian countries with Pacific states Australia and New Zealand plus the Association of Southeast Asian nations (ASEAN) economies cover 30 percent of the global population and 29 percent of global trade with annual volume at $5.4 billion.

The United Nations Conference on Trade and Development (UNCTAD) projects the new regional free trade pact would bolster Korea’s exports in the region by 2 percent. The Ministry of Trade, Industry, and Energy estimates the gross domestic product will benefit 0.14 percentage point in growth over the next 20 years.

The actual gains will hinge on trade with Japan and ASEAN. Korea could benefit from removal of duties from Japan as it lacks a bilateral FTA with the country of chronic trade deficit. Key exports to ASEAN also would become largely tariff-free.

The regional FTA could offer a relief to Korea whose trade balance has been impaired from spike in import cost in energy sources.

Japan remains dominant in ASEAN by commanding more than 70 percent of the vehicle market in Vietnam and others. The RCEP could widen opportunities for Korean companies, said an official from the Korea Automobile Manufacturers Association.

The Korean government plans to file for membership to another multilateral FTA Comprehensive and Progressive Trans-Pacific Partnership (CPTPP) in April. Korea can add Canada, Mexico, Chile, and Peru to its list of FTA partners from the joining.

By Song Min-geun and Jenny Lee