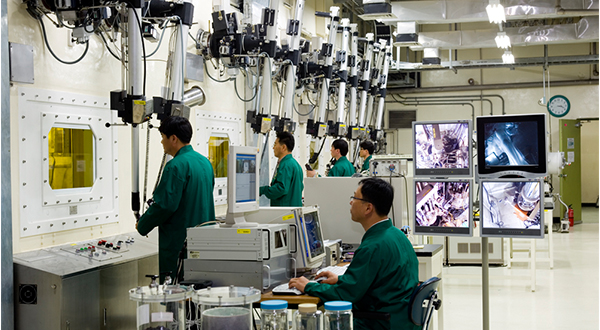 이미지 확대
Research of pyroprocessing, a technology to recycle nuclear reactor waste back into fuel, is at risk of suspension in South Korea despite progress in the development as the government’s basic plan for high-level radioactive waste management, which is the basis for the enactment of a special law, focuses only on the disposal of spent nuclear fuel, experts point out.

It is more advantageous to dispose of nuclear waste after reprocessing in Korea like other small land countries rather than burying it directly in the ground, but some policy makers are refusing to include reprocessing methods such as pyroprocessing in the special act on nuclear waste management, citing that their economic feasibility is not fully validated and the construction of a demo reactor may require significant extra budget expenditure, according to sources.

A government official said that since pyroprocessing was judged to be a basic R&D field technology, it was dropped from the basic plan, adding that policymakers may see it as a task that could be pursued as a policy only when financial resources are secured in the basic R&D sector.

Pyroprocessing, dubbed ‘dream technology’, is an advanced method to treat spent nuclear fuel, which the Korean government has invested a total of 788.9 billion won ($554.8 million) for commercial development since 1997. Many countries are trying to develop this technology and South Korea is quite ahead in commercial viability.

Nuclear fuel made from enriched uranium becomes a waste fuel rod that loses its function as a fuel after being burned in a nuclear reactor for about three years. but the fuel rod contains 93 percent of initial uranium (U235, U238), which can still generate energy by causing a fission reaction.

After pyroprocessing, the waste fuel rod can be recycled back into nuclear fuel, and toxic transuranium elements present in spent fuel are also incinerated. Through pyroprocessing, the volume of the spent fuel rod and radiotoxicity can be reduced to about 1/20 and 1/1000, respectively, contributing to reducing the size of a high-level waste repository to one-hundredth, according to researchers.

Currently, temporary waste storage facilities installed on the site of the nuclear power plants in Korea are almost saturated. South Korea has operated its first nuclear plant 25 years ago, but it is yet to decide on a method of disposing of high-level radioactive waste.

Nuclear experts, including those from the Korea Atomic Energy Research Institute (KAERI), said it is worrisome that the current government has an unacceptable attitude toward research on pyroprocessing whose need was recognized even by the former government which advocated for nuclear phase-out policy.