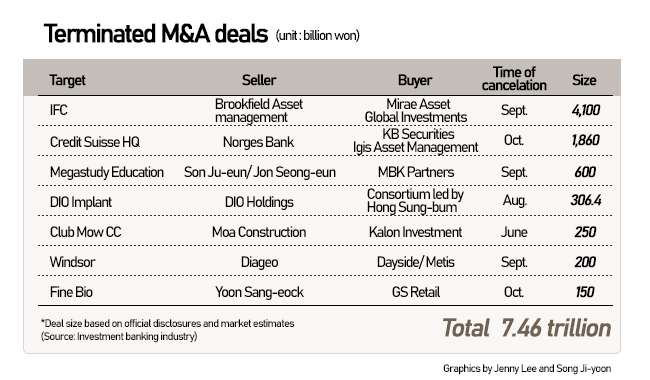 The lull will likely continue into the first half of next year as investors opt to pay penalties instead of seeing through their deals amid foggy corporate and property market outlook.

According to the investment banking industry on Thursday, cancelled M&A deals so far in the second half reached over 7.4 trillion won ($5.25 billion). A big chunk of the total figure, equivalent to 6.9 trillion won, happened from September to date mainly due to difficulty in financing as institutional investors became wary of fundraising amid interest rate hikes.

Mirae Asset Global Investments’ deal to acquire the International Finance Center (IFC) Seoul, worth 4.1 trillion won, was canceled last month, four months after it was selected as a preferred bidder in May. Its deal with Brookfield Asset Management broke down as the the top investment bank could not pool in enough institutional investors, according to sources. Although the firm tried to make a breakthrough by setting up a private real estate investment trust (REIT) to finance the purchase, its plan was rejected by the Ministry of Land, Infrastructure, and Transport.

Other deals have broken down after related parties failed to agree on deal values. DIO Implant signed a deal with a consortium led by Hong Sung-bum, head of Shanghai Seouleaguer Hospital. But the deal fell through as the two sides differed on the change of corporate value. The implant firm’s shares plummeted after its disclosure of the transaction.

MBK Partners also did not see through the deal to buy a controlling stake in Megastudy Education worth 600 billion won last month.

Although failed deals can bring substantial disadvantages to stakeholders, they have chosen penalties over the risk from growing market uncertainties. The total deals in the third quarter amounted to 7.12 trillion won, just a third of 21.47 trillion won from a year ago.

By Park Chang-young and Jenny Lee