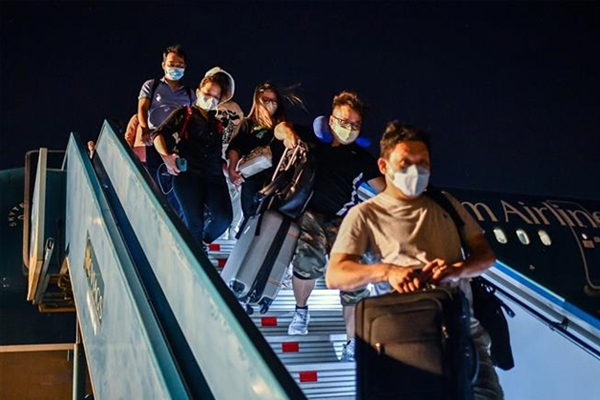 A representative of Vietnam Airlines said that this flight officially marked the period of opening regular international transport, restoring the bridge connecting Việt Nam`s aviation with the world and opening up prospects for a strong recovery of aviation and tourism after the pandemic.

The flight is part of a plan to restore regular international flights with high safety factors, starting from January 1, 2022, which has been approved by the Government. This policy aims to restore international passenger transport activities; promoting the process of economic recovery, tourism as well as creating conditions for Vietnamese citizens to return home to celebrate the Lunar New Year.

Previously, Vietnam Airlines announced a plan to resume regular international flights between Việt Nam and 15 countries and territories in the first half of 2022. The resumption of routes will be carried out in two phases.

Phase 1 was expected to start from January 1, 2022. Vietnam Airlines planned to operate two-way flights between Việt Nam and the United States, Japan, Korea, Taiwan (China), Singapore, and Thailand, Laos, and Cambodia. This phase was expected to take place in about two weeks.

The plan is subject to change according to the approval of relevant authorities and the developments of the pandemic.

During this period, Vietnam Airlines recommends that passengers meet the regulations including negative COVID-19 test, being fully vaccinated, or having recovered from COVID-19 before departure.

Vietnam Airlines will maintain the application of pandemic prevention measures to flights such as: spraying aircraft with disinfectants, simplifying services to limit multiple contacts, passengers monitoring their health and isolating according to regulations of the Ministry of Transport. Medical monitoring after landing.

Việt Nam had closed its borders and grounded all regular international flights in March 2020, only allowing in its nationals and foreign experts, investors and highly skilled workers coming by special flights.

In an interview with the Vietnam News Agency correspondent in Cambodia, Uch Leang, acting director of the Department of Asian-African and Middle East Studies of the Institute of International Relations (Royal Academy of Cambodia), said that reopening international flights is a decisive and timely decision of the Government of Việt Nam as the whole region is trying to recover economies, repair the global supply chain interrupted during the COVID-19 pandemic.

After a long time of difficult travel due to regulations on isolation and prevention of the pandemic, Uch Leang highly appreciated the plan to open flight routes of Việt Nam in an attempt to live safely with COVID-19. Cambodia and Việt Nam have close connections in terms of trade and investment activities; the travel needs of overseas Vietnamese in Cambodia and the needs of Cambodia in travelling to Việt Nam for medical examination and treatment are huge.

In another move, the first international flight operated by new-generation airline Vietjet this year departed from Tokyo (Japan) and arrived at Nội Bài International Airport in Hà Nội on January 1.

Đinh Viết Sơn, Deputy Director of the Civil Aviation Authority of Vietnam, and representatives from the Nội Bài airport and Viejet were present at the ceremony to welcome 143 passengers on board the flight.

The airline has resumed the Hà Nội-Tokyo route from January 1 with one flight per week, with the frequency expected to be increased in the time ahead.

It has also announced the flight schedules between Hà Nội/Hồ Chí Minh City and Taipei (Taiwan, China), Singapore, Thailand and the Republic of Korea (RoK), which are set for early this year.

Vietjet Managing Director Đinh Việt Phương said the carrier was ready in terms of resources to reopen all regular international flights in line with COVID-19 prevention and control regulations.