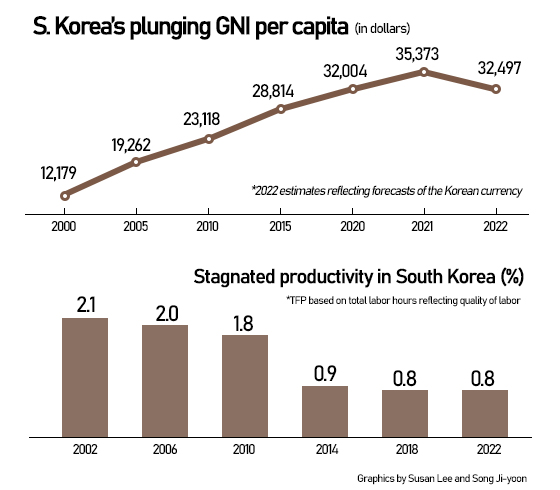 이미지 확대
South Koreans are expected to tighten their belt further later this year as their purchasing power has substantially weakened following a plunge in the Korean currency value against the U.S. dollar amid growing economic recession fear.

According to the Bank for International Settlements (BIS) on Tuesday, the real effective exchange rate (REER) of the Korean won stood at 100.21 in August, the lowest in 10 years since recording 99.71 in September 2012.

REER is a measure of the real value of a currency in relation to an index or basket of 60 other major currencies. The higher a country’s REER, the greater its purchasing power is compared to other nations.

The drop in Korea’s REER index has become more prominent as trade conditions worsened due to the surge in raw material prices and the weak Korean currency, forcing consumers to cut back on spending. Out of 1,000 people aged 18 or older, 59.7 percent said that they plan to reduce spending in the second half of the year, according to a survey conducted by Mono Research on behalf of the Federation of Korean Industries (FKI).

The tumbling Korean currency value was also reflected in an analysis from Maeil Business Newspaper and Korea Economic Research Institute (KERI) that estimates the GNI per capita – the average before-tax income of a country’s citizen converted to U.S. dollars – at $32,497 this year, down 8.1 percent from the previous year when the country’s GNI hit a record high of $35,373.

GNI per capita, which is the dollar value of a country’s final income in a year, measures the real income of a country’s citizens. The latest analysis indicates the overall purchasing power of Koreans is weakening rapidly from its peak, and Korean consumers have to spend more dollars than before to buy commodities and goods from abroad, said Sung Tae-yoon, a professor at Yonsei University’s Department of Economics.

A decline in GNI per capita is not a big deal to a country with a strong economy even in a volatile foreign exchange rate condition. But Korea is now facing double whammy of low productivity and weak economic fundamental, taking a toll on its ability to earn dollars.

The Bank of Korea estimates Korea’s potential growth rate in 2021-22 at 2.0 percent, lower than 2.5 to 2.7 percent in 2016-20 and 3.1 to 3.2 percent in 2011-15. The fall in the potential growth rate is mainly due to the country’s plummeting total factor productivity (TFP) - a measure of productivity that shows how much output can be produced from a certain amount of input – since the 2008 financial crisis. The TFP dropped to 0.8 percent this year after falling to 1.9 percent in 2009 after the financial crisis.

Korea must expand support to advance the country’s key export-oriented industries and lift the TFP index with relaxed regulations to stabilize the Korean won, said Sung.

By Kim Jung-hwan and Susan Lee