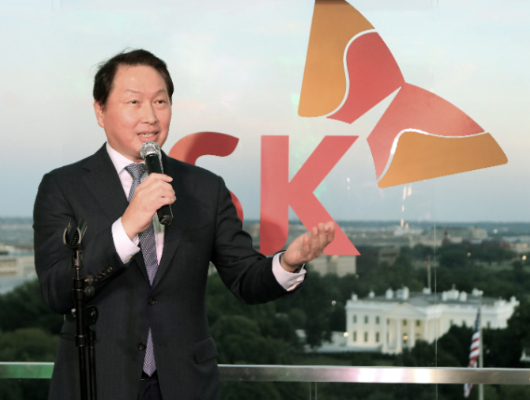 SK Group Chairman Chey Tae-won has called for a careful and rational responses to the recently enacted U.S. Inflation Reduction Act (IRA) favoring domestically produced electric vehicles, as it is not bad to Korean businesses in the long run.

“Let’s not feel like Washington has backstabbed us. Emotional responses don`t help. South Korea must find a solution by understanding the inevitability of this legislation in the United States,” Chey told reporters during a press conference in Washington D.C. on Wednesday (local time).

The IRA signed by President Joe Biden in August has emerged as a hot button issue in Seoul as it aims to give tax credits to buyers of EVs assembled only in North America, triggering concerns that South Korean automakers may lose ground in the U.S. market without subsidies.

Chey who doubles as chairman of the Korea Chamber of Commerce and Industry expressed his optimism for Korea’s top automaker Hyundai Motor, saying “Hyundai Motor will eventually be able to overcome the challenge with its strong competitiveness in EVs.”

Chey expected the IRA would give Korean companies both opportunities and risks depending on the speed or depth of decoupling in global economies.

SK is not well known to the public in the U.S because it is not consumer goods-oriented unlike Samsung and Hyundai, but the public’s awareness of SK has increased since Chey’s latest visit to the White House, leading to advantages in partnership development with American companies, said SK E&S Vice Chairman Yoo Jeong-joon, who was present with Chey in the conference.

Chey serves as Chairman of SK Inc., overseeing all 125 operating companies within the SK brand.

Chey also expressed concern about the escalating tensions between Washington and Beijing following the visit of House Speaker Nancy Pelosi and some American lawmakers to Taiwan. Chey said SK Group is reviewing a contingency plan in case of extreme conflicts like military clashes between the U.S. and China, and this is in his worst-case scenario.

As for the Chinese market, he asserted that “Korea has a fairly strong manufacturing industry and an export-oriented economy. China accounts for 25 percent of Korea’s exports, and thus, it doesn`t make sense to abandon this market all of a sudden."

Despite the negative outlook for the chip industry due to reduced demand, SK hynix recently decided to expand its production site in Korea.

“The semiconductor industry went up and down every three to four years, but recently it has moved on a one-year basis. However, there is steady demand for chips, and I think the demand will continue to rise,” he said.

Regarding his work to help Busan with the attraction for the 2030 World Expo as co-chair of South Korea’s bidding committee, Chey admitted that Saudi Arabia is in the upper hand but he thought Korea has a chance to bid for the expo in the next one year before the announcement.