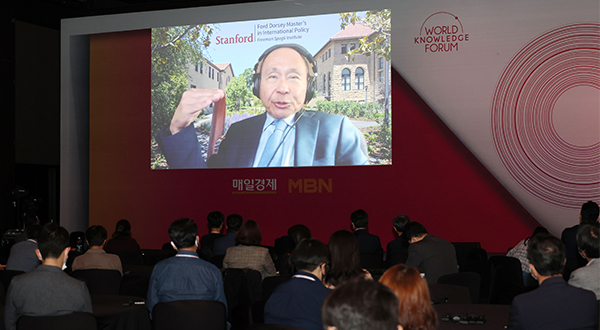 Despite waning confidence in the democracy institution, the system respecting diversity and debate serves better for global peace and prosperity as they would not come to “questionable” and overbearing decisions such as Russian invasion of Ukraine and Chinese lockdown of cities for zero-Covid policy, according to Francis Fukuyama, professor of political science at Stanford University and champion of liberal democracy.

“A lot of democracies allowed themselves to become … rigid, can’t adjust policy easily,” Fukuyama said in a World Knowledge Forum’s live debating session themed on Restoring Liberalism” in Seoul Thursday. “But I do think that we have to remember the ability to make big decisions rapidly that authoritarian countries claim is not a good thing.”

He mentioned two big decisions – invasion of Ukraine on the part of Russia and implementation of zero-Covid policy in China. These are “very questionable decisions” only possible in an authoritarian country that do not need citizen consent.

“That’s one of the things that happen in democracy – you have discussion and debate,” Fukuyama said, adding that it leads to “better quality in decision making.”

The professor’s remarks were made in response to a question raised by the floor on why non-liberal democracies deny liberalism.

Fukuyama noted that dictatorships like Russia and China don’t take authority “from divide source,” which is a pragmatic argument.

“This is in contrast to democracies that are constantly divided, have arguing interest groups that have inability to change because some interest groups are so powerful that they simply would block any efforts to do something different,” he said, but it also invites ordinary people to take part in decisions.

As to ways to rebuild trust in classical liberalism in a chaotic world, Fukuyama called for governments to become “more responsive, accountable, and effective.” He pointed to increasingly polarization and populism in the democracies, such as in the United States and South Korea.

“A lot of populism arises because ordinary people do not believe that the elites that run the political system, media, universities, have their interests at heart,” Fukuyama said.

Such polarization has been panning out in the U.S. and threatening the concept of democracy. He criticized how former president Donald Trump has refused to accept 2020 presidential election results.

“The concept of soft power … the power to lead by example – that’s been an important source of American power over the decades,” Fukuyama said. “Many people around the world believed in American democracy, thought it was very successful, and that wealth and power was based on democratic institutions.”

It’s harder to believe that now, however, because “those institutions aren’t working well.”

He pointed to regionalism in Korea breeding “polarized politics”

“Korea adopted a presidential system like the U.S., and one of the big problems with presidentialism is that it tends to create a polarized system of winner takes all,” the professor said. “Regions in Korea also create loyalties and are reflected in Korean politics.”