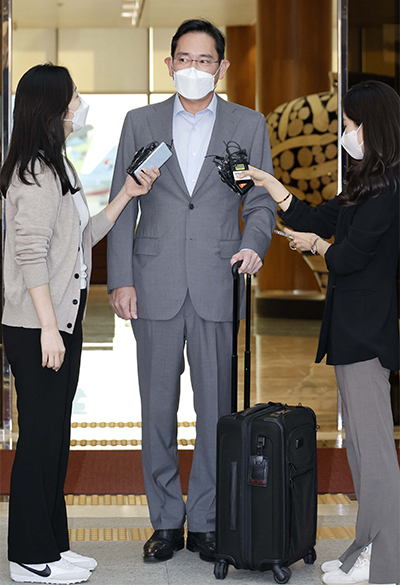 South Korea’s Samsung Electronics Co. may discuss joining a pre-IPO scheme over British chip design house Arm Holdings Ltd. if it gets the offer from Softbank Group founder and chief Masayoshi Son due in Seoul next month.

Jay Y. Lee, vice chairman of Samsung Electronics Co. upon returning from a business trip to Mexico, Panama, and the United Kingdom, Wednesday told reporters he expects Son “to make a proposal” when he was asked whether he had met Arm management while in London.

Son, an M&A tycoon, is said to be tapping strategic investors ahead of an IPO possibly in New York or London after a deal to sell 75 percent stake in Arm to Nvidia floundered.

Graphics chipmaker Nvidia’s deal to buy Softbank stake in Arm at $40 billion failed to go through in the face of regulatory challenges.

Arm has the proprietary chip design for application and graphic processors to operate smartphones and artificial intelligence.

Most of the processors Samsung Electronics, Apple, and Qualcomm manufacture use Arm’s basic design. Graphic processor units (GPU) that is essential to artificial intelligence chips also begin from Arm design.

Arm partner with manufacturers from early stage of design and provide the blueprint to manufacturers at reasonable cost. It charges royalty at an adequate level as not to lose clients.

About 90 percent of smartphones sold globally and 85 percent of tablet PCs are based on Arm basic design but the company’s annual revenue remains around $1.5 billion.

Nvidia could not acquire Arm broke due the British company’s monopoly status.

If Samsung Electronics wishes to go after the fabless chipmaker, it would have to partner with others to address antitrust issues.

Qualcomm and Intel of U.S. and Korea’s SK hynix are interested in Arm.

The estimated sales price has also gone up to $66 billion from $40 billion as Arm shares soared after Nvidia’s M&A announcement.

During his meeting, Son could invite in equity investment before IPO of Arm.

Samsung has said it could seek mega M&A after a hiatus since its purchase of U.S. car infotainment and audio company Harman in 2016.