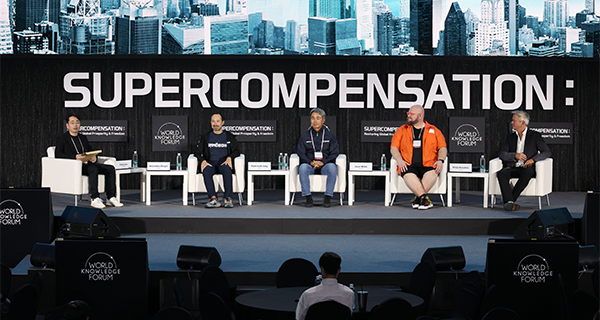 Ownership and interoperability will become more distinguished and open vast opportunities for both game consumers and developers in the age of Web 3.0 based on blockchain and NFT technologies, according to software experts at the 2022 World Knowledge Forum (WKF) in Seoul.

“The notion of true digital ownership did not exist in the video gaming industry 25 or 30 years ago...but with blockchain and transparent technology we were able to enable the birth of a real digital economy,” said Sebastien Borget, the CEO of The Sandbox, at the “Legends in the Making: The Future of Web 3.0 Gaming” session held on Wednesday.

Wemade CEO Jang Hyun-kook agreed as blockchain “will bring a paradigm shift to video games” as it has allowed creators to extract items from games and trade them over an exchange to apply them on other games.

The session – held at Jane Chung Arena - featured leaders of the gaming industry such as co-founder of Borget, the CEO of Wemade Jang, founder of Linden Lab Philip Rosedale, and President of Blockchain at Gala Games Jason Brink The session was moderated by Yohan Lee, the Global Operations Manager of The Sandbox.

Borget found that the concept of ownership has empowered players to be creators which also helped maintain a strong retention rate for users. 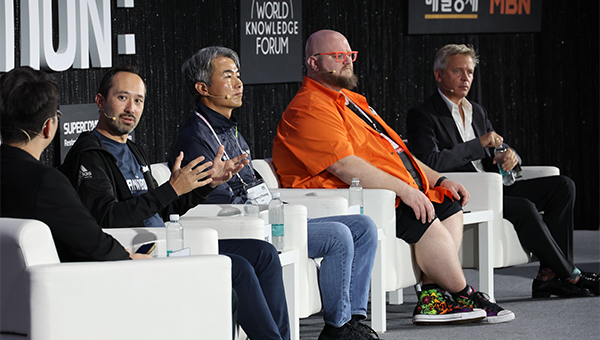 “We faced a challenge regarding retention rates as people left for other platforms where they could make revenue but in 2017 we found out that combining NFTs with content was the solution that allowed creators to monetize and own items as they want,” said Borget. The Sandbox is a decentralized virtual world where creators own 70 percent of it and within a few years they may own 100 percent of it, he added.

Achieving interoperability has been more challenging.

“Interoperability is closely tied with licensed content...if you want to use a concept in a different game with a different developer, you need to give it a utility, code...all things that many people aren’t aware of,” said Brink. IP-based content depends on changing intellectual property laws, fair use, ect., he added.

They were sanguine about greater opportunities for consumers and developers in the age of Web 3.0.

“The most important thing to do is to get down your high horse and maybe even talk in Discord...let them be angry, vent...engage with people because that`s what makes a difference,” said Brink.

Rosedale urged companies to create something of value saying that “searching for positive value is one area where the underlying platform doesn’t matter.”