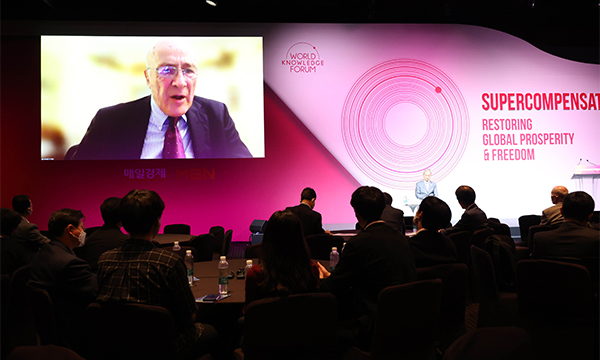 The U.S. protectionism is deepening in the face of Chinese ascent, baffling traditional allies like South Korea with a series of Buy Americanism laws including the CHIPS and Science Act, observed Joseph Nye, distinguished service professor emeritus at Harvard University.

“I would have to say … protectionism has gotten stronger in many countries particularly in the U.S.,” Nye said during a World Knowledge Forum session titled “Conversation with Joseph Nye: America’s Leadership in a Divided World” Wednesday. The session was moderated by Ahn Ho-young, president of University of North Korean Studies.

“Every democracy has a degree of protectionism,” he said, adding that what’s a problem is that this degree of “protectionism has gotten stronger.”

His remarks were made in response to a question raised by Ahn on growing concerns about laws in the U.S. that protect its own industries discriminating others such as the U.S. Chips and Science Act and Inflation Reduction Act.

“Comments and criticism from our allies like Korea helped remind us we’re not perfect, we’re far from it,” Nye said.

When it comes to claims that the U.S. leadership is not as strong as it was before, Nye admitted that “it certainly is less than it used to be” but still it is still strong in Europe or East Asia.

“In Europe, NATO coalition is more unified and more coherent today than it’s ever been,” Nye said, “and alliance between U.S. and two democratic states in East Asia – Japan and Korea – those alliances are quite strong.” 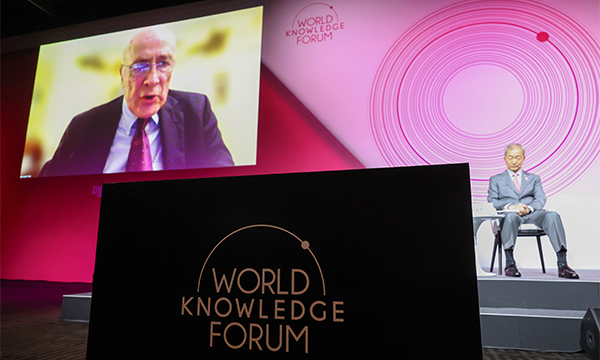 Nye noted that U.S. leadership has diminished in areas like the Middle East after it pulled out of the war in Afghanistan but its presence is still strong in Europe and East Asia, and it has capacity to “prevail over both China and Russia” with its crucial alliance.

Noting that Korea and Japan are “two enormous success stories,” Nye said the “fact that they are not closely allied and working together as democracies is unfortunate.”

He called for the two countries to work together to face challenges and threats such as from North Korea and the rise of China as there are “strong self-interests.”

“The danger I see is that both countries have become somewhat trapped by history, and instead of looking forward, tend to look back,” he said. “Korea should have a foreign policy which looks out to play a larger role in the world and to part of the parts in that direction is to get over this fixation of history with Japan.”