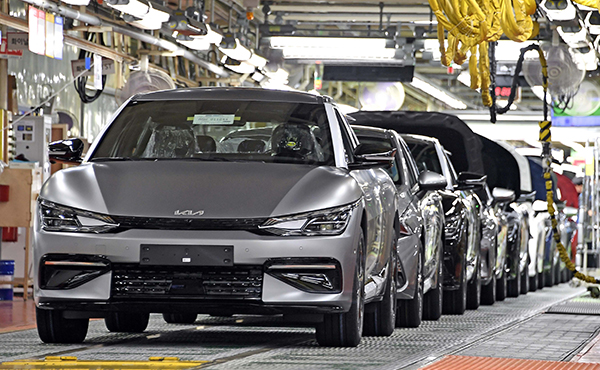 South Korea’s Kia Corp. will first churn out existing electric vehicles from the new electric vehicle-dedicated plant in Georgia to become operational in 2024 to respond faster with the Inflation Reduction Act (IRA) restricting tax credits to EVs manufactured in the U.S.

The first EV and battery plant in Georgia, Hyundai Motor Group is building in Byran County at an investment of $5.54 billion will deliver EV6, the first Kia all-electric model based on the Hyundai’s proprietary EV platform E-GMP, in the first half of 2024, according to industry sources on Monday. EV6 which has been a hit in the U.S. and Europe so far is entirely shipped out from Hwaseong, Gyeonggi Province in Korea.

Kia needs union approval to share some of EV6 shipments with the U.S. plant. The union reportedly has approved of the idea.

Kia originally planned to produce its first all-electric SUV model EV9 from its U.S. factory but has changed its plan as not to lose its growing presence in the U.S market.

Kia and Hyundai models have become No. 2 EV seller in the U.S. after Tesla in the first half.

But the new IRA that took effect last month can change their position as the law mandates EVs assembled in the U.S. with materials sourced from the U.S. eligible for up to $7,500 tax grants. Hyundai Motor’s Ioniq 5 and Kia’s EV6 immediately lose the incentives.

The EV6 is priced at minimum $39,950. With the tax grant, buyers could buy the car for about $33,000. Without the benefit, Kia will inevitably bear the loss of sales. Its cumulative sales in the U.S. totaled 16,200 units up to August this year.

Hyundai Motor Co. is beginning to produce hybrid vehicles first in the U.S. from next month to offset potential loss from waning EV sales – Santa Fe Hybrid from its Alabama plant. Last month, it sold total 14,903 units of green cars in the U.S., of which 72.4 percent or 10,807 units were hybrids.

Hyundai Motor Group is also pushing to complete construction of its first EV-devoted factory in the U.S. in 2024 instead of originally scheduled 2025.

Government officials have been going all out to persuade U.S. legislative and government to grant Hyundai and Kia cars the same tax credit at least until the U.S. plant becomes operational.