Korea’s economy to slow to 2.2% next year after inflation at 24-year high this year: OECD 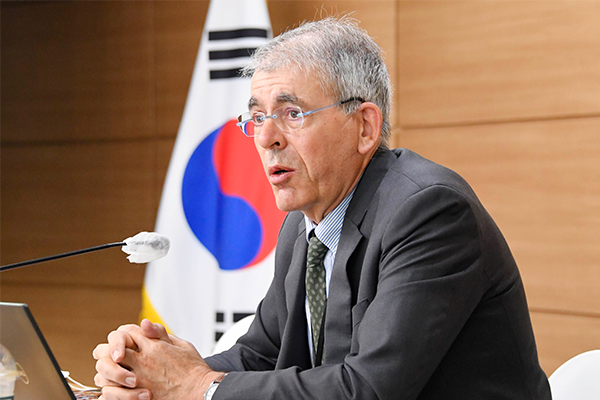 Vincent Koen, deputy head of the OECD economics department. [Photo by Ministry of Economy and Finance]

The Organization for Economic Cooperation and Development (OECD) projected South Korea’s annual inflation would hit 24-year high of 5.2 percent this year and stay near 4 percent next year, when economic growth would slow to 2.2 percent from this year’s estimated 2.8 percent as the result.

It upped estimate for private consumption growth to 3.7 percent from 2.3 percent three months ago, while yanking down export outlook to a rise of 4.7 percent from 9.2 percent.

“The Omicron wave and supply disruptions weighed on economic activity in early 2022, while the lifting of practically all restrictions set the stage for consumption in contact-intensive services to recover from late spring,” it said, “although with a drag from inflation.”

The OECD added that the “recovery in consumption is nonetheless expected to be gradual, as inflationary pressures from commodity prices and supply chain disruptions are being passed on to consumers.”

As the result, growth next year would slow to 2.2 percent, down 0.3 percentage point from OECD”s earlier projection of 2.5 percent.

“Growth will continue in 2023, although at a slower pace as global growth is weakening,” it noted.

As to risk factors, the OECD cited Russia’s invasion of Ukraine that is weakening the outlook, “even though Korea is less directly exposed than many OECD peers.” 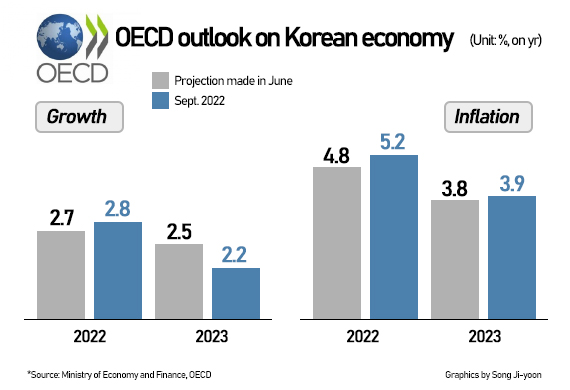 이미지 확대
“High household debt is an increasing vulnerability in a period of high inflation and monetary policy tightening,” it added.

The OECD raised its forecast on Korea’s inflation to 5.2 percent, up 0.4 percentage point from 4.8 percent in June. The figure is higher than the government’s projection of 4.7 percent, IMF 4.0 percent, Korea Development Institute 4.2 percent, and ADB 4.5 percent. It is in line with the Bank of Korea that also forecast 5.2 percent inflation.

Under the projection, Korea will be experiencing the steepest inflation gain in 24 years after 7.5 percent in 1998.

The OECD also raised its inflation forecast for next year to 3.9 percent from 3.8 percent under the condition that oil prices remain at current level.

Consumer price growth in August has slowed in August but concerns still remain that it may rise again in mid-autumn, said Vincent Koen, deputy head of OECD visiting Seoul.

Koen noted that a rise in core inflation has led inflation to spread to other items on top of energy and food. Inflationary pressure grows also as the U.S. dollar nears 1,400 won, he said.

Faster rises in interest rates in the U.S. have fanned the weakening in the Korean won, according to Koen.

Koen noted that Korea’s real effective exchange rate is at the level of 2013 and stronger than the 2008 global financial crisis.

A real effective exchange rate is a measure of the value of a currency against a basket of other major currencies.

He found the weakening in the won will persist on perception that the BOK won’t like move as aggressive in rate increases as the U.S.