S. Korea’s job addition slows down in August for 3rd month in a row

South Korea added more than 800,000 jobs from a year ago period, with its unemployment rate reaching an all-time low, but the growth has slowed for the third consecutive month amid growing economic uncertainty.

According to data released by Statistics Korea on Friday, the total number of employed stood at 28.41 million in August, up 807,000 from the previous year, the largest addition in the month of August in 22 years.

The employment rate for those aged 15 and above came to 62.8 percent, up 1.6 percentage points on year, the highest in August since 1982. 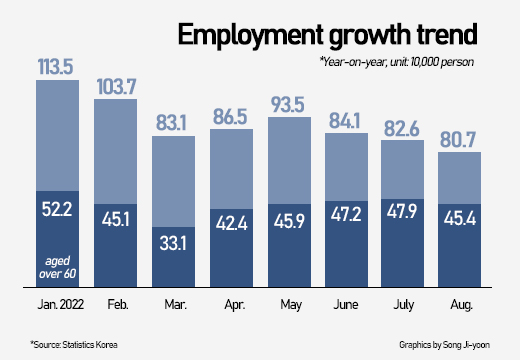 이미지 확대
Job additions were mainly led by the manufacturing sector with the addition of 240,000, followed by the healthcare and social welfare service sector with 123,000. Employment in the construction sector plunged by 22,000, falling for the first time in 19 months due to the heavy rainfalls in August.

The unemployed tally came to 615,000, down 129,000 from the previous year, the lowest ever recorded. The jobless rate came to 2.1 percent, falling 0.5 percentage points on year.

Those who work for 36 hours or longer per week dropped by 6.2 percent on year to 15.43 million, declining for the first time in 10 months.

The economically inactive population – those who are neither working nor actively seeking jobs – stood at 16.24 million, declining by 3.1 percent from a year earlier. Those who gave up searching for jobs fell by 180,000 on year to 467,000.