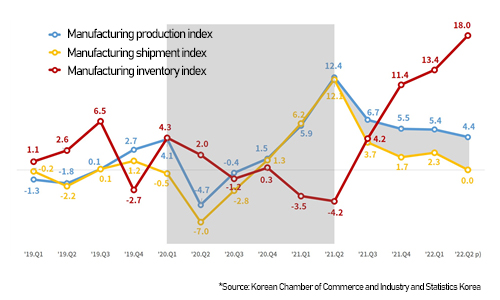 이미지 확대
Manufacturing inventory levels have spiked in South Korea mainly due to the cooling demand from runaway inflation, aggressive monetary tightening and the ongoing Russia-Ukraine war, signaling an economic slump, said the Korea Chamber of Commerce and Industry (KCCI).

The country’s manufacturing inventory levels rose 18 percent on year in the second quarter, the highest since 1996 before the Asian financial crisis, according to its report on the corporate activity and recent economic situation published on Friday.

Inventory levels rise and fall in line with the business cycles, but it is rare for inventories to continue rising for four consecutive quarters since the second quarter of last year, the report noted.

Big business groups reported their inventories added 22 percent in the second quarter from minus 6.4 percent a year earlier. Small- and mid-sized companies saw their inventory levels grew 7 percent from a 1.2 percent gain against a year-ago period.

Such a rapid increase in inventory levels comes partly after manufacturers have rushed to secure raw materials before further hikes in oil and commodities prices and have produced finished goods. But deliveries have been delayed due to disruption in global supply chains, leaving most products pile up in factories.

Production plunge on surging inventories could cause a slump in the economy, and thus the role of policy authorities now is more important than ever, KCCI emphasized.