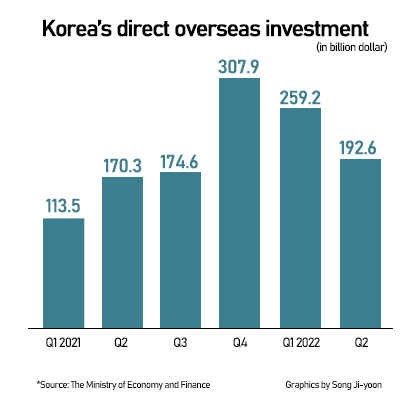 The country’s overseas direct investment came to $19.26 billion in the second quarter ended in June, down 25.7 percent from the first quarter, showed data published by the Ministry of Economy and Finance on Friday.

The quarterly decline is primarily due to growing uncertainty in the investment market, such as mounting borrowing costs amid fast-paced rate hikes at central banks around the world, said a finance ministry official.

However, overseas direct investment jumped 13.1 percent compared to a year ago to mark the highest level for a second quarter.

By industry, investments in the finance and insurance sector rose 22.1 percent on year, manufacturing sector 75.4 percent, and real estate 5.2 percent.

Investments in North America accounted for the largest 41.2 percent of the total, followed by Asia with 20.5 percent, Central/South Americas with 17.7 percent, Europe with 16.8 percent, and Oceania with 3.4 percent.