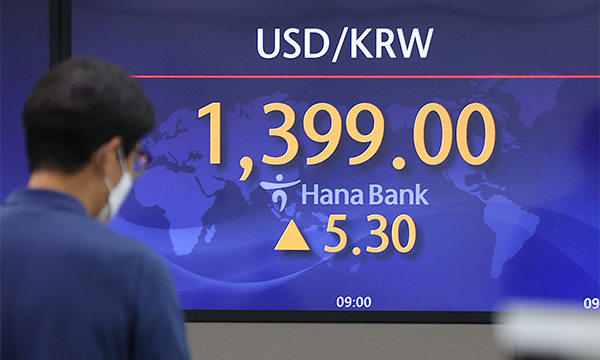 The Korean won is flirting with the psychologically important 1,400-mark against the U.S dollar on Friday even after the local government’s verbal intervention made on the previous day.

The won hit a fresh 13-year low in value against the dollar despite the verbal intervention of Finance Minister Choo Kyung-ho on Thursday, saying the government would take necessary measures to tackle excessive volatility in the FX market while “closely monitoring the market.”

The Korean currency’s depreciation was accelerated after the Chinese yuan, which the Korean won usually moves in sync, broke the psychologically important threshold of 7 yuan per dollar overnight.

The Korean won along with other major Asian currencies losing rapidly its ground as the U.S. dollar further strengthens on the expectation that the U.S. Federal Reserve would carry out more hawkish moves to combat runaway inflation.