Seoul authorities are readying “all possible means” to slow the Korean currency heading towards 1,400 won against the U.S. dollar as the downside for the local currency widened on the growing possibility of stronger and lengthier U.S. tightening actions against unrelenting inflation.

First Vice Finance Minister Bang Ki-sun on Wednesday ordered “all available means to stabilize the market” as volatility has deepened from uncertainties on the pace and scope of rate increases in major economies due to runaway inflation.

The won breached 1,390 versus the U.S. dollar to go as low as 1,395.5 during early Wednesday session. The 1,400-won level has become attainable for the first time since the spring of 2009 amid spillover from the Wall Street meltdown. The dollar finished Wednesday at 1,390.9 won, up 17.3 won from the previous closing. 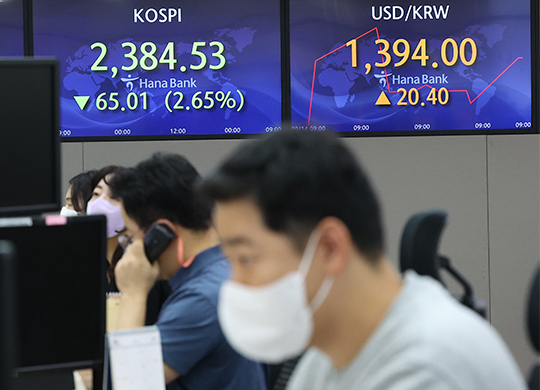 According to the Bureau of Labor Statistics on Tuesday, the U.S. consumer price index rose 8.3 percent on year in August, stronger than market expectations of 8 percent, despite eased oil prices. The core CPI that excludes volatile food and energy cost, climbed 6.3 percent on year and 0.6 percent on month in August.

The benchmark Kospi ended 1.56 percent down at 2,411.42 after falling to as low as 2,381.5. Foreigners and institutional investors were net sellers while retail investors net buyers.