Both Korean exports and imports fall by double digits, deficit at $2.4 bn Sept. 1-10

Both exports and imports by South Korea fell in double digits in the first 10 day of September, with outbound shipments shrinking in steeper pace to suggest deficit streak in the trade balance for the sixth month for the first time in 25 years and worsening conditions for the trade-reliant economy.

According to data released by Korea Customs Service on Tuesday, the country’s trade balance incurred a deficit of $2.4 billion in the first 10 days of September, widening from $1.48 billion in the same period a year ago.

As of Sept. 10, cumulative trade deficit this year has reached $27.55 billion.

Korea managed to report a trade surplus of $895 million with China in the first 10 days of September as imports fell sharper than exports with the country’s biggest trade partner.

Korea had logged a deficit for four months in a row until August, the first since the bilateral relations normalized in 1992.

The country’s exports from September 1 to 10 totaled $16.2 billion, down 16.6 percent from the same period a year ago. Average daily export increased 9 percent on year based on 6.5 working days, two days shorter than a year earlier due to Chuseok holiday. 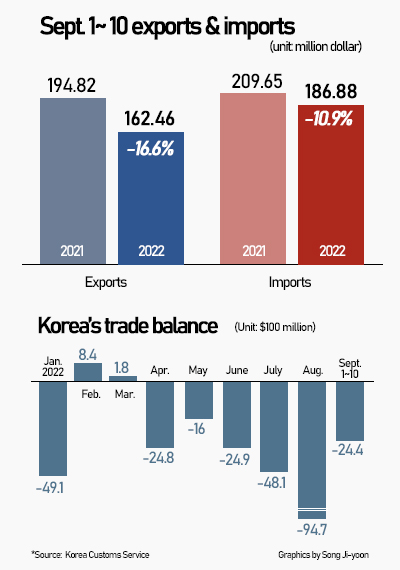 Imports have been exceeding exports in growth nonstop from June last year.