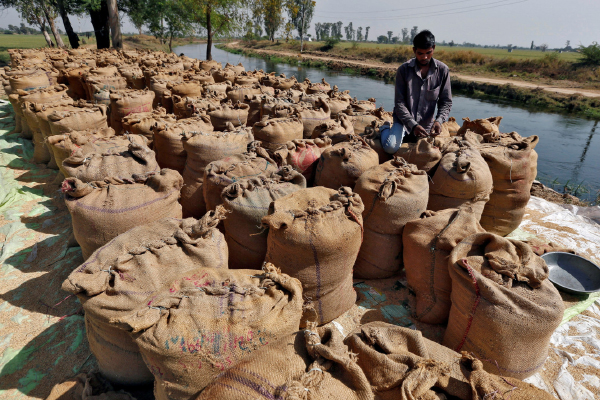 A worker packs a sack filled with rice on the outskirts of the western Indian city of Ahmedabad February 27, 2015. (Reuters/Amit Dave)

India`s restrictions on rice exports have paralyzed trading in Asia, with buyers scouring for alternative supplies from Vietnam, Thailand and Myanmar where seller is holding off on deals as prices rise, industry officials said. India, the world`s biggest exporter of the grain, banned shipments of broken rice and imposed a 20 percent duty on exports of various other types on Thursday as the country tries to boost supplies and calm prices after below-average monsoon rainfall curtailed planting. Rice is the latest in a string of commodities that have faced export curbs this year as governments struggled to raise supplies and fight inflation amid trade disruptions triggered by the Ukraine war.

Rice prices have jumped 5 percent in Asia since India`s announcement and are expected to rise further this week keeping buyers and sellers on the sidelines. "Rice trading is paralyzed across Asia. Traders don`t want to commit anything in a hurry," said Himanshu Agarwal, executive director at Satyam Balajee, India`s biggest rice exporter. "India accounts for more than 40 percent of global shipments. So, nobody is sure how much prices will rise in the coming months." Rice is a staple for more than 3 billion people, and when India banned exports in 2007, global prices shot to record highs of around US$1,000 per tonne.

India`s rice exports reached a record 21.5 million tonnes in 2021, more than the combined shipments of the world`s next four biggest exporters of the grain: Thailand, Vietnam, Pakistan and the United States. Loading halted Rice loading has stopped at Indian ports and nearly one million tonnes of grain are trapped there as buyers refuse to pay the government`s new 20 percent export levy on top of the agreed contract price. Though there are some buyers ready to pay higher prices for new contracts, shippers are currently sorting out pending contracts, Nitin Gupta, vice president for Olam India`s rice business. As Indian exporters stopped signing new contracts, buyers are trying to secure supplies from rival Thailand, Vietnam and Myanmar, which have raised the price of 5 percent broken white rice by around $20 per tonne in the past four days, dealers said. But even these suppliers are reluctant to rush for contracts as they are expecting prices to strengthen. "We expect prices to rise further over the coming weeks," a trader based in Ho Chi Minh City said. Vietnam`s 5 percent broken rice was offered at $410 per tonne on Monday, up from $390-$393 per tonne last week, traders said. China, the Philippines, Bangladesh and African countries such as Senegal, Benin, Nigeria and Ghana are among leading importers of common grade rice, while Iran, Iraq and Saudi Arabia import premium grade basmati rice. Supply disruptions from the COVID-19 pandemic and more recently the Russia-Ukraine war has jacked up the prices of grains but rice has largely bucked the trend due to bumper crops and ample inventories at exporters over the past two years. Buyers now fear India`s move could boost rice prices and make the staple expensive like wheat and corn, said a Mumbai-based dealer with a global trading firm.