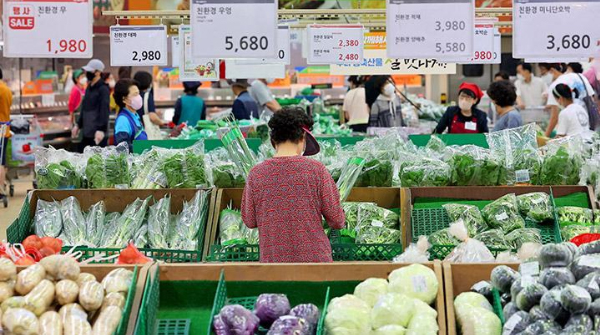 The U.S. dollar surge of near 10 percent against the Korean won in the first half has pushed up Korean consumer prices by 0.4 percentage point to suggest inflation running high for some time, given the unfazed strength in the greenback that has made imports costly and widened deficit in trade, said the Bank of Korea (BOK).

The BOK in explaining the factors behind its first-ever rate hike in 50 basis points in July in Monetary and Credit Policy Report published Thursday found the gain in the dollar-won rate has translated into 0.4 percentage rise in the consumer price index in the first half.

The dollar rose about 10 percent from 1,191.8 won in early January to 1,298.4 won in late June. The dollar added another 7 percent from July. Inflation gain averaged at 4.6 percent in the first half, and has been hovering around 6 percent in recent months, whereas the dollar has been climbing towards 1,400 won.

The BOK raised the base rate from 1.75 percent to 2.25 percent in July through its first hike in 50 basis points. After another raise to 2.50 percent in August, the bank suggested continued increases in milder 25 basis points until inflation and expected inflation come down to targeted level of around 2 percent.

It however indicated inflation won’t easily come down from the high level as the positive correlation between expected inflation and actual inflation is very pronounced during inflationary times.