Naver, Kakao in horserace over super AI with differing target and approach 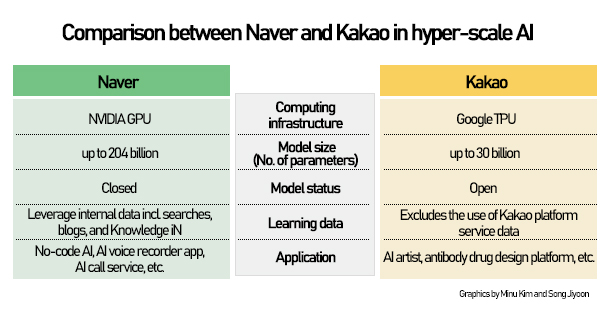 이미지 확대
Korean big-tech names Naver and Kakao are in horserace in development and application of super-sized artificial intelligence (AI) in differing fields.

According to sources on Tuesday, Naver is trying to monetize its hyper-scale AI called Hyper CLOVA, a hyper-scale AI language model introduced for the first time in Korea in May last year from its company in company organization CLOVA dedicated to AI research.

In contrast, Kakao is conducting a hyper-scale AI development project centered on digital health care through its AI research subsidiary Kakao Brain. It plans to build an AI-based antibody drug design platform with hyper-scale AI language and multimodal models trained in data sets of texts and images. Hyper-scale AI-based medical imaging services are also on the list for commercial development. Kakao aims to become a game changer in the AI market in at least two to three years.

Even in AI learning data, the two have different principles. Naver utilizes Korean language data accumulated through its platform service, but Kakao decided to exclude the use of in-house data. Naver does not disclose its hyper-scale AI model, but Kakao is releasing its version on GitHub, the world’s largest open-source community. Kakao Brain plans to release the English and Japanese models of the Korean language model KoGPT within this year.

However, both companies still have a long way to go in the monetization of hyper-scale AI. Both companies so far are losing tens of billions of won every quarter in this business.