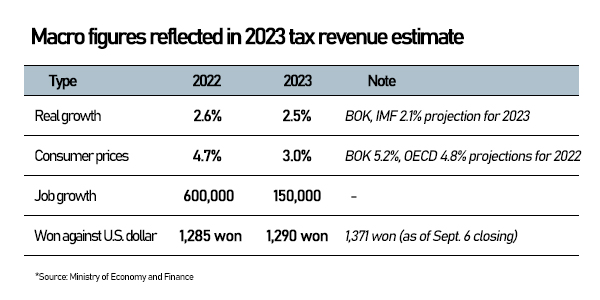 이미지 확대
South Korean government could fall short of tax revenue target next year as it has based economic forecasts more sanguine than what the central bank and most institutions project amid deteriorating trade from strong commodity import prices and slowed global demand.

According to the 2023 tax income budget estimate analysis the Ministry of Economy and Finance submitted to the National Assembly for budgetary review, the government projected Korea’s real gross domestic product (GDP) to expand 2.6 percent this year and 2.5 percent next year.’

The government has been submitting forecast on tax revenue on data projections for the following year since 2019.

Based on the macro indicators, the government estimated tax revenue at 400.46 trillion won ($288.8 billion) for next year, up 0.8 percent from this year’s estimate of 397.09 trillion won.

Although the government’s estimates claim to be based on conservative indices, they pose sanguine compared to forecasts by most institutions including the central bank.

The Korean won weakening accelerated over the last week, passing 1,360 and 1,370 to dip below 1,380 against the dollar Wednesday.

Given the pace, the dollar could go as high as 1,400 won, analysts have warned.