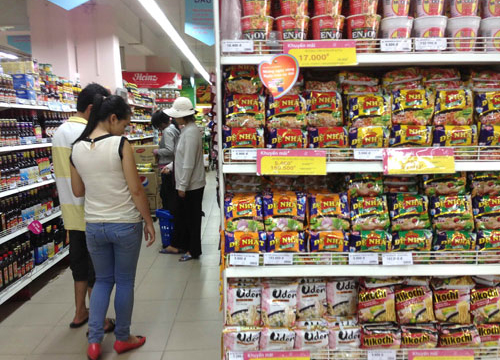 Việt Nam is considered as having a high purchasing power for instant noodles.” Photo nld.vn

HÀ NỘI — Việt Nam passed South Korea to lead the consumption per capita of instant noodles in the world in 2021, according to the World Instant Noodles Association (WINA).

A representative from Nongshim told the media: “Việt Nam has a high purchasing power with its increasing economic growth rate. Also, people tend to eat at home rather than dining out due to COVID-19.”

Data said after the COVID-19 pandemic, instant noodle consumption in Việt Nam skyrocketed. Overcoming India and Japan, in 2020, Việt Nam became the third largest country in instant noodle consumption with 7 billion packages, up 29 per cent. In 2021 the country consumed more than 8.5 billion packages of noodles, up 22 per cent. In terms of growth rate, no market in the top 10 has surpassed Việt Nam.

Insiders said that about 50 companies are currently producing instant noodles, including domestic and foreign enterprises, adding the market has been in a battle led by Acecook with the Hao Hao noodle brand, Masan Consumer with Omachi, Kokomi and Asia Food with the brand of Red Bear noodles.

A few years ago, Uniben, with the brand of 3 Mien noodles, entered the market strongly and became the fourth major player.

At the same time, with the huge ecosystem in Việt Nam, especially the system of supermarkets/convenience stores WinMart/Winmart+ with thousands of points, Masan Consumer’s noodle products have a significant advantage in distribution.

According to data from VNDIRECT Securities Company’s analysis report, Omachi instant noodles dominate the high-end segment with a 45 per cent market share.

In 2021, Masan Consumer’s noodle sales reached VNĐ8.8 trillion, up 28 per cent and equivalent to 72 per cent of Acecook’s revenue.

Ranked fourth in the market, Uniben achieved more than VNĐ3.4 trillion in revenue, up 12 per cent.

In the third place, the revenue of Asia Food in 2021 decreased by 4 per cent to more than VNĐ5.5 trillion. Also recording less income, Safoco and Colusa-Miliket were announced. In 2021, Miliket’s revenue was VNĐ571 billion, down 7 per cent.

As for foreign brands, Korean instant noodles were gaining popularity in the Vietnamese market, especially among young people.

Korean instant noodle businesses such as Paldo Vina and Nongshim with Shin noodles were earning hundreds of billions of đồng from the Vietnamese market.

In 2021, Paldo Vina recorded revenue of VNĐ912 billion, up 8 per cent and a profit of VNĐ49 billion, which was higher than Asia Food.

Paldo Vina imported original products from Korea, such as Jjajangmen black sauce mixed noodles, which weigh four times more than a package of noodles produced in the local market.

Having been in Việt Nam since 2018, Nongshim reached VNĐ150 billion in revenue and VNĐ9 billion in profit last year. The manufacturer installed noodle cooking machines at some convenience stores and operates food trucks in HCM City. — VNS