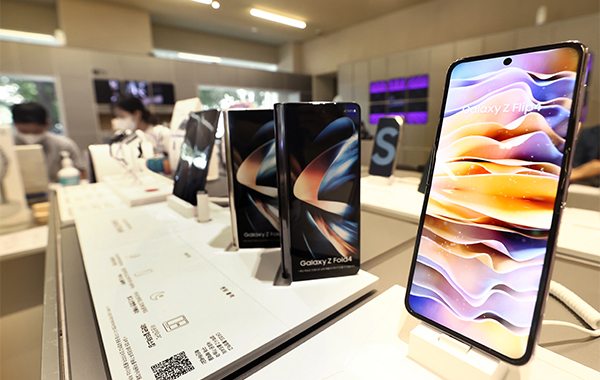 Initial sales of Samsung Electronics’ Galaxy Z Flip 4 and Galaxy Z Fold 4 have reached new record in Europe and shipments have doubled compared with their predecessors, according to Benjamin Braun, the tech giant’s chief marketing officer in Europe. He was speaking to reporters at a press conference in Berlin, Germany, Thursday, one day before the kickoff of IFA, the largest tech trade show in Europe.

Samsung Electronics released the duo foldable phones in 36 European countries including the United Kingdom, Germany, France, Spain, and the Netherlands, on August 26. The handsets are selling well in all markets and sales are surpassing their predecessors.

The Galaxy Z Flip 4 accounts for 60 percent of entire sales in Europe while the Fold 4 40 percent, according to Samsung Electronics. Color-wise, demand for graphite and bora purple Galaxy Z Flip 4s is high while for Z Fold 4 grey green and phantom black.

Consumers in Europe have been taken by Galaxy Z Flip 4’s sensible design and increased battery capacity. They are after FelxCam that offer new filming experience only available in foldable phones.

Another appeal of Galaxy Z Fold 4 is Taskbar feature that enhances multi-tasking activity and light weight – 8 grams lighter than the Z Fold 3.

Samsung Electronics has been accelerating efforts this year to make foldable phones more popular in the global market.

Samsung Electronics, meanwhile, plans to offer software updates from this month of its Galaxy Watch 4 series and Galaxy foldable smartphones. All users of the models will be able to experience multi-tasking and FlexCam features. Details on the updates will be announced later by region and country.