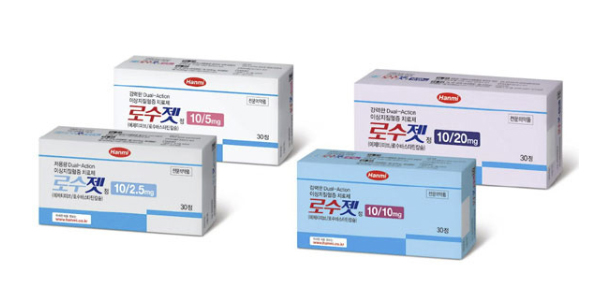 Rosuzet, a dyslipidemia medicine, raised hopes for its maker Hanmi Pharmaceutical of South Korea for greater demand in the outpatient prescription market with additional positive data from a recent study to show superiority to the conventional high-dose statin monotherapy.

During a press conference held in Seoul on Monday, investigators participating in the study (RACING) praised the medicine as a paradigm change in the treatment of dyslipidemia.

Rosuzet launched in Nov. 2015 is a single-pill combination of two different medicines: rosuvastatin (statin), which inhibits cholesterol synthesis in the liver, and ezetimibe, which controls cholesterol absorption in the small intestine.

The drug independently developed by Hanmi Pharm is a leading prescription drug in Korea with over 100 billion won in annual outpatient sales.

Hanmi Pharm expects sales from the drug to surpass 200 billion won ($153 million) in 2024 with additional evidence on treatment benefits from a Rosuzet study was presented in The Lancet in July. The study led by Prof. Kim Byeong-Keuk, a cardiologist at Severance Hospital was conducted in 3,780 patients with arteriosclerotic cardiovascular disease at 26 sites across Korea for five years.