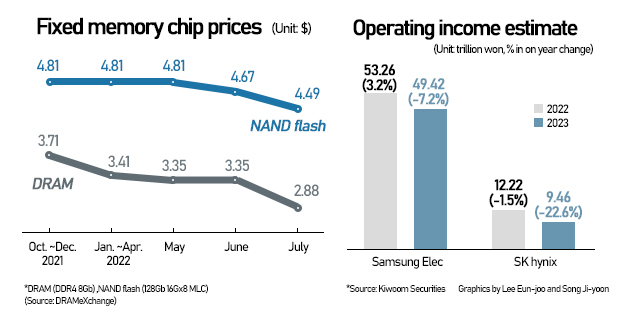 Shares of Samsung Electronics were trading 2.17 percent down at 58,700 won ($44.8) on Wednesday morning from Tuesday’s closing of 60,000 won. The stock finished 1.32 percent lower Tuesday as foreign investors shed 229 billion won.

Doubts over the world’s two leading DRAM makers have been rising from continued fall in DRAM prices.

They were aggravated after Nvidia on Monday reported weaker-than-expected preliminary revenue of $6.7 billion for the second quarter, sharply below initial outlook of $8.1 billion. The chipmaker particularly forecast weak gaming revenue – 33 percent down from last year – due to “lower sell-in of gaming products reflecting a reduction in channel partner sales likely due to macroeconomic headwinds.”

Nvidia’s data center segment also reported $3.81 billion in preliminary revenue for the second quarter, up 1 percent on quarter and 61 percent on year but 5 percent below market expectations.

The weak results of its data center business that had expected to maintain high growth based on solid demand are raising concerns about an overall slowdown in IT demand.

A down cycle is forecast for Samsung Electronics and SK hynix as prices of DRAM and NAND flash continue to fall.

“There are concerns about a decline in server demand in the fourth quarter amid a sharp fall in mobile demand,” said Park Yoo-ak, a researcher at Kiwoom Securities.