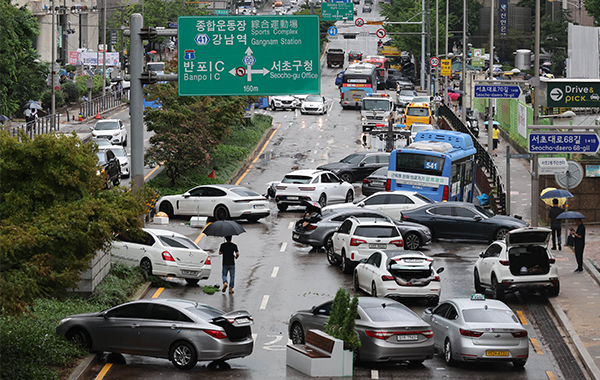 Nine people have died, 7 others missing, and 17 injured after the heaviest rainfall in 80 years swamped Seoul and other parts of the capital region that flooded homes and roads to cause insurance claims of nearly 86 billion won ($66 million) from car damages alone.

According to Central Disaster and Safety Countermeasures Headquarters, the heavy rainfall that swept Seoul and the capital area this week has left 9 people dead (5 in Seoul, 3 in Gyeonggi, and one in Gangwon), 7 missing (four in Seoul and 3 in Gyeonggi), and 17 injured (Gyeonggi) as of 6 a.m. Wednesday.

The headquarters also said that 398 households or 570 people have lost their homes, mainly those in Seoul and Gyeonggi area.

The heaviest hit areas in Seoul were in southern part of the city with low ground.

On Tuesday morning, vehicles left by their drivers due to flooding occupied the roads near Gangnam Station in southern Seoul. Buses and taxies were also deserted.

Electricity and water shut down in office and residential buildings near the station due to the heavy rainfall. Some families in Sadang-dong in Dongjak District had to evacuate to nearby shelters after parts of the apartment retaining wall collapsed. Some villas and houses in Sadang-dong were flooded.

Some drivers in Seocho Tunnel that connects Sadang-dong and Yangjae-dong in southern Seoul were also isolated inside Tuesday for hours due to traffic congestion.

Some subway tracks were inundated, and parts of the services and riverside roads remain suspended. 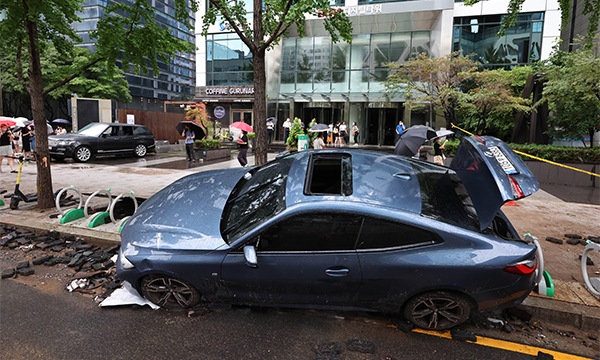 The rainfall over two days has left nearly 7,000 vehicles damaged, with claims expected to be near record high since torrential rain has moved to the central region.

“It is record damage as a single disaster,” said an unnamed official from an insurer. “The damage is expected to be even larger with more rain coming in central parts of the region.”

“It is unusual to see a flood of vehicle damage claims in near 7,000 cars in just two days. Damaged vehicles due to rain were mainly in Seoul, Gyeonggi, and Incheon areas,” said an unnamed official from DB Insurance. “Only two registrations were from Ulsan and North Gyeongsang regions.”

The General Insurance Association of Korea noted that the rainfall inundated cars in the posh neighborhoods of Gangnam, Seoul.

Non-life insurers enjoyed improved loss ratio during Covid-19-hit years in 2020 and 2021 on reduced operation of cars. Damage from the torrential rainfall, however, is expected to wreck their finance as well.