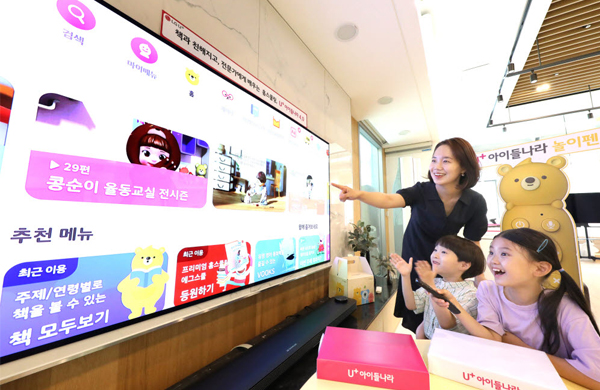 LG Uplus has decided to demerge its (Internet Protocol television) IPTV business “U+tv Kids World” to launch a new OTT business to keep up with the trend. Its bigger rivals SK Telecom and KT have already been making strides in standalone OTT operations.

LG Uplus has shifted to a high-gear mode as a latecomer. As of July, about 20 percent of its new job postings were from U+tv Kids World. It also made a strategic investment in content entertainment company SAMG Entertainment last month.

Wireless carriers have been racing to steal the streaming market dominated by Netflix.

SK Telecom, KT, and LG Uplus are expected to make over 1 trillion won ($766 billion) investment in total over the next four years as they all aim to grow their media and content businesses to compensate for the stagnated income from telecommunications service and network.

OTT has been an easier market to make inroads as streaming services can be packaged into their wireless broadband plans and can appeal to customers since watching streaming shows has become a pastime norm in pandemic environment. 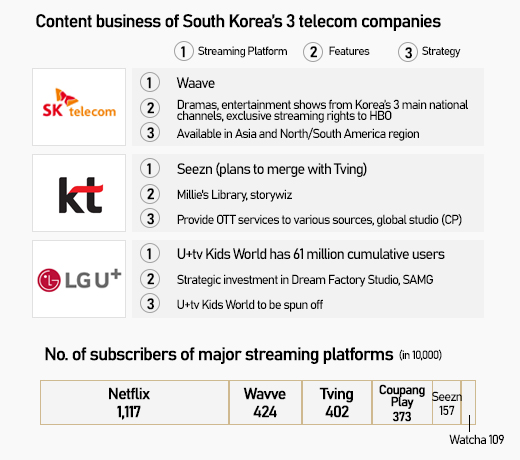 이미지 확대
SK Telecom has been Netflix`s most formidable rival in Korea. Its content business is expected to account for more than 35 percent of its entire wireless telecommunication revenue this year, more than 10 percentage points higher from 2019 when it first launched its OTT service “Wavve” where users can stream dramas and entertainment shows from all three main Korean terrestrial broadcasts. SK also announced plans to make a massive investment of more than 100 billion won to diversity its content business.

KT has ascended fast after arranging a merger of its streaming platform “Seezn” with CJ ENM’s streaming platform “Tving”. The union can beat SK Telecom’s Waave in terms of OTT subscribers. The combined entity is expected to have around 5.59 million subscribers, exceeding Waave’s 4.24 million based on data from market research company Mobile Index. Against KT’s move, SK Telecom is expected to review an option to buy another local OTT service Watchat that has been grappling with financial issues.

After the stunning success of “Extraordinary Attorney Woo,” KT’s skyTV has gained confidence in original production and plans to inject 500 billion won over the next three years to produce more than 30 original dramas and 300 entertainment shows.