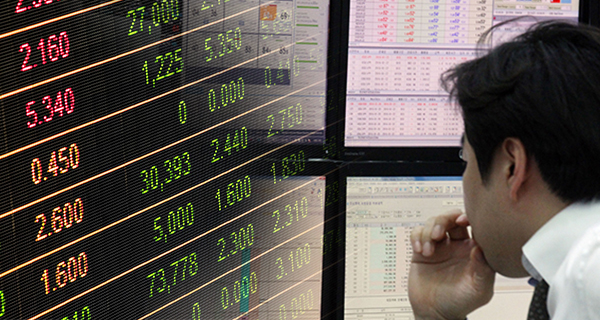 이미지 확대
Individual investors in South Korea are dumping the bearish stock market and shifting to the bond market in preference over safer assets amid growing economic uncertainties.

According to the Korea Financial Investment Association on Sunday, individual investors net bought 3.51 trillion won ($2.7 billion) worth of bonds in the over-the-counter (OTC) market for a month from July 4 to August 4.

At the same time, retailers are abandoning the stock market they have led over the last two years.

From July 4 to August 4, individual investors net sold 1.22 trillion won worth of stocks in the securities market when the main index recovered above 2,400 mark.

Bonds are considered to be safe assets even during times of market volatility as investors can receive their principal and interest payment if they are held by the maturity date as long as the bond issuer such as the state, public institutions, and companies continue to operate.

Interest rates and bond prices move in opposite directions, meaning investors can profit if they sell the bonds they bought at a low price in a high-interest rate environment after the interest rate falls.

The annual yield on unsecured three-year corporate bonds with AA- rating surged to 4.4 percent in mid-June before falling to 4 percent, remaining at high levels compared to the annual yield of 2.42 percent at the end of last year.

The offering of Hyundai Motor bonds worth 20 billion won and Kia bonds worth 25 billion won arranged by Korea Investment & Securities sold out within one minute of the sale. On July 15, Samsung Securities’ sale of bonds from bank and financial holding groups at an annual yield in 4 percent range before tax sold out in 27 minutes.

According to the disclosures with the Financial Supervisory Service (FSS) on Sunday, out of the Kosdaq-listed companies that have decided to issue convertible bonds from the previous month to last Friday, five offerings promised an interest rate of over 5 percent for bonds that are held until maturity.