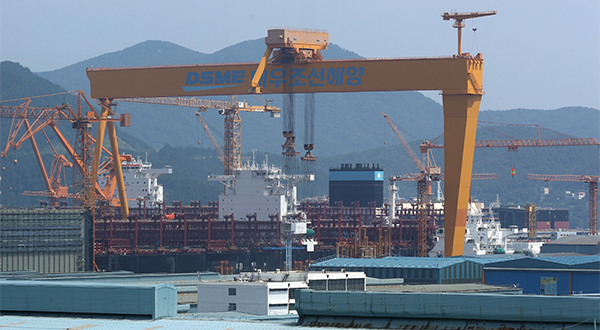 The consensus is building up among South Korean state authorities to break up Daewoo Shipbuilding & Marine Engineering Co. (DSME) to facilitate privatization of the shipwright stricken with deficit and regular strikes under state management for decades after $9 billion bailout with public funds.

Korea Development Bank (KDB)’s new Chairman Kang Seog-hoon in a recent parliamentary hearing said that the state policy lender is “reviewing various options including a split sale” for DSME after a near two-month-long strike by subcontractor workers.

The government previously maintained it could not break up DSME whose dockyards are also responsible for naval capabilities for security reasons.

The change in the stance comes as the government has come to lose patience and confidence in managing DSME under militant union.

The break-up in the defense and civilian shipbuilding can lessen the cost of the builder as it only leaves Samsung Heavy Industries at home to afford the rivaling dockyard after the merger plan with bigger Hyundai Heavy Industries Group flopped due to the opposition from European Union antitrust authority.

The KDB plans to raise discussion on the sale as early as this month when it receives the results of new outsourced due diligence and consulting review.

The split sale scenario had previously been off the table as it would be difficult to physically divide shipyard space by defense and civilian units. DSME builds special vessels like submarines in a security area separated from a space that builds commercial vessels.

All of the vessels, however, share the same dockyard for basic procedures like fabrication and block manufacturing. Complete separation of the dockyard space could undermine processing efficiency and weaken price competitiveness, according to DSME.

DSME had also reviewed a split sale of its special vessel business as part of business normalization in 2016 while under lengthy drought in orders. It had tried to secure liquidity through a strategic investor or initial public offering. The plan, however, later was aborted as it was not viable.

The metal union under DSME on Monday argued a split sale isn’t feasible. It said that “DSME has an internal structure in which the special vessel and merchant vessel divisions cannot be separated for a sale, and KDB is well aware of this.”

The defense vessel unit accounts for 10 to 20 percent of DSME’s entire sales. Candidates interested in DSME’s defense unit may not want to acquire the other mainstay operation that makes LNG, oil, and container carriers, an area rivalling Hyundai Heavy Industries and Samsung Heavy Industries are already strong.

Some industry officials, nevertheless, noted that a split sale scenario isn’t “completely impossible,” although the shipbuilder would lose price efficiency through shared processing.

DSME has reported 71 percent plunge in revenue over the past six years amid reduced orders since its accounting fraud scandal in 2015.