U.S. pressure mounts on Korea to join Chip 4 amid Pelosi visit to Taipei and Seoul 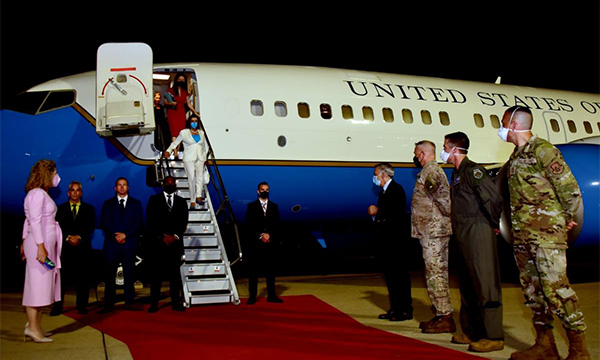 [Photo by Embassy of the United States in Seoul]

U.S. pressure to join the so-called Chip 4 value chain is building up on South Korea as U.S. House Speaker Nancy Pelosi arrived in Seoul on Wednesday after her controversial trip to Taiwan that included a meeting with the chief of the world’s largest foundry.

According to foreign media outlets, Pelosi, the third-highest rank from Washington met with Mark Liu, chairman of the Taiwan Semiconductor Manufacturing Company (TSMC) on Wednesday just before she headed for South Korea and discussed chip-related issues including the ambitious American Chips and Science Act that recently passed the legislative. She also had lunch with Liu, TSMC Founder Morris Chang, and Taiwanese President Tsai Ing-wen.

The visit comes as the U.S. has been intensifying its tech war with China and upping efforts to reduce Beijing’s presence in the global supply chain. The U.S. has invited Korea to join the semiconductor alliance Chip 4 that includes Japan and Taiwan. The Congress last week passed the Chips and Science Act enabling $52.7 billion subsidy to chip facilities in the U.S.

Pelosi and Liu have also reportedly discussed the Chips Act, measures to expand TSMC production in the U.S., and the Chip 4 alliance. TSMC accounts for 60 percent of world’s foundry market.

The U.S.-led Chip 4 alliance proposes to connect the upstream integrated circuit designers of U.S. with midstream manufacturing giants of Korea and Taiwan and Japan’s strength in equipment, components, and materials to contain China’s rising influence in the chip market.

The U.S. has been enhancing efforts to strengthen its chip supply chain by offering various incentives.

TSMC is building a $12 billion, 5-nano high-tech fab in Phoenix, Arizona, which will be complete in 2024. Korea’s Samsung Electronics Co. has pledged to invest $17 billion to build a new foundry plant in Taylor, Texas.

The U.S. proposal puts Korea and its chipmakers in awkward position as China remains the biggest chip market and core production base for Korean memory chips.

China accounted for 39 percent, or $50.2 billion of Korea’s $128 billion chip exports in 2021. It also accounts for more than 30 percent of each Samsung Electronics and SK hynix revenue. 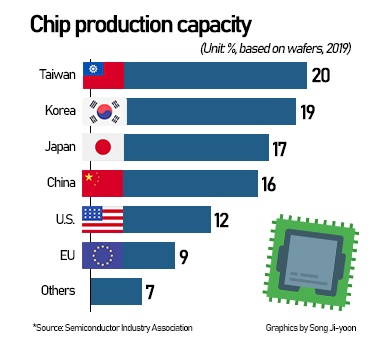 이미지 확대
Samsung Electronics operates a NAND flash production facility in Xi’an and a chip packaging facility in Suzhou, China. SK hynix has a DRAM memory plant in Wuxi, a packaging plant in Chongqing, and a NAND flash factory it had acquired from Intel in Dalian.

At the same time, they cannot ignore U.S. invitation as they rely on U.S. advanced technologies and could be disadvantaged in business activities unless they comply.

The so-called “guardrails” provision in the Chips Act bans chipmakers from expanding advanced facilities in China for 10 years if they receive federal subsidy for their investment in U.S.

Meanwhile, at home, the government has moved to strengthen self-sufficiency in tech component sector.

The Ministry of Trade, Industry and Energy on Wednesday said that the Cabinet approved a special measure related to enhancing and protecting competitiveness of national high-tech strategic industry.

The ministry will designate chips and display technologies as national high-tech strategic technologies as early as in September and offer fast-tracking in various registration and regulatory procedures when establishing chip-focused industrial zones.

“The government is enhancing policy support so that high-tech industries remain competitive in the global market,” said Lee Min-woo, head of industry policy at the ministry.