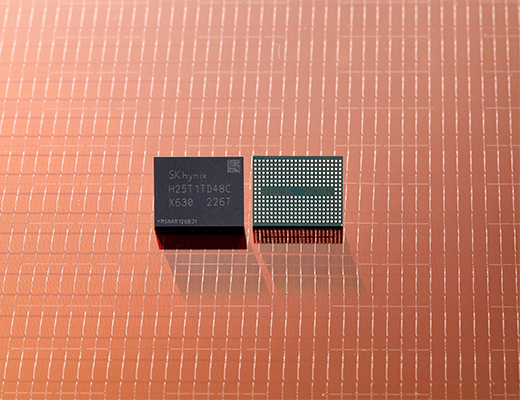 SK hynix upped the ante in the race for greater density in flash memory by unveiling samples of the world’s highest NAND in 238-layer 4D design that could enter production from the first half of 2023, while Samsung Electronics exhibited an array of highly functional nonvolatile memory chipsets at the Flash Memory Summit 2022.

SK hynix announced Wednesday that it shipped samples of 238-layer 512Gb triple level cell 4D NAND, the “most layered and smallest in area” to date.

The Korean chipmaker showed off the product at the Flash Memory Summit, held in Santa Clara, U.S. this week until Thursday, as it raced to beat the competition with Micron Technology of the U.S. who in June announced the initiation of volume production of 232-layer NAND.

SK hynix managed to raise the height to 238, enhancing productivity by 34% compared with its 176-layer NAND under production since December 2020 as more chips with higher density per unit area can be produced from each wafer, according to its press release.

The 238-layer product has a data-transfer speed of 2.4 gigabits per second, which is a 50 percent increase from the previous generation. It also consumes 21 percent less energy for data.

The first 238-layer chip will serve client SSDs, which are used as PC storage devices. It will apply the design for chips for smartphones and high-capacity SSDs for servers afterward.

The company plans to introduce 238-layer products in 1 terabit next year, with density doubled compared to the current 512-gigabit product.

Also at the Flash Memory Summit 2022, industry No.1 in nonvolatile as well as volatile memory, Samsung Electronics showcased its next-generation technologies addressing the needs of the four key areas of the big data market - data movement, data storage, data processing, and data management.

Samsung Electronics introduced ‘Petabyte Storage,’ its next-generation storage technology. The company said it allows server unit to pack more than one petabyte of storage and enable server manufacturers to sharply increase their storage capacity within the same floor space with a minimal number of servers.

It also showcased ‘Memory-semantic SSD,’ which “combines the benefits of storage and DRAM memory.” The company explained that Memory-semantic SSDs can achieve up to a 20-times improvement in both random read speed and latency when used in artificial intelligence and machine learning applications.

According to global research firm Omdia, Samsung Electronics was behind 35.5 percent of the global NAND flash in the first quarter of 2022 in terms of sales. Kioxia of Japan was second with 19.0 percent and SK hynix third with 18.1 percent.