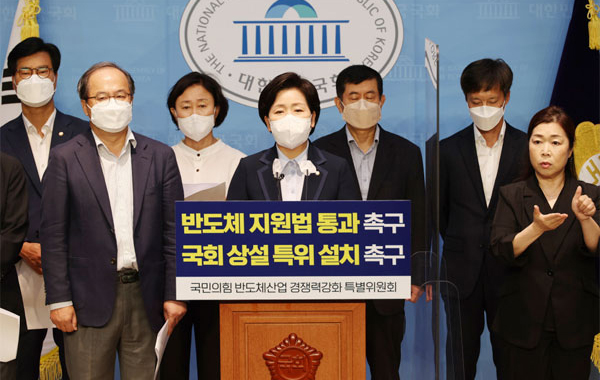 Governing People Power Party (PPP) has packaged a South Korean version of Chips Act proposing to exempt taxes of up to 30 percent for new chip facility and fast-track creation of chip clusters under state sponsorship.

The PPP’s special committee to boost chip industry competitiveness Tuesday unveiled amendments to the National High-Tech Strategic Industry Act and the Restriction of Special Taxation Act enabling sweeping tax incentives to facility investments by both big and small chipmakers and related industry and fast-tracking in establishments of chip-focused industrial zones.

Under the revised bills to be motioned for review by opposition-dominated legislative on Thursday,

The grant has been proposed to last until 2030.

The ruling party calls for tax incentives higher than 12 percent tax deductions proposed by the government in July for large and mid-size companies and up to 20 percent for small- and mid-size companies in line with state supports and subsidies to chip industry in the United States, Japan, and elsewhere amid fierce competition over chip hegemony and self-sufficiency.

“Further adjustments will be needed after revision in the National Assembly as the Ministry of Economy and Finance needs to take into account of tax revenue balance,,” said an unnamed government official.

“Offering high tax deductions has become a general trend globally in the chip sector and we should also revise ours,” said an unnamed official from the industry ministry.

A separate bill proposes the National High-Tech Strategic Industry Commission to have the authority to permit chip cluster zones by exempting feasibility review and allow various promotions. Addition tax incentives will be offered to companies who connect with universities to groom engineers in the chip industry.