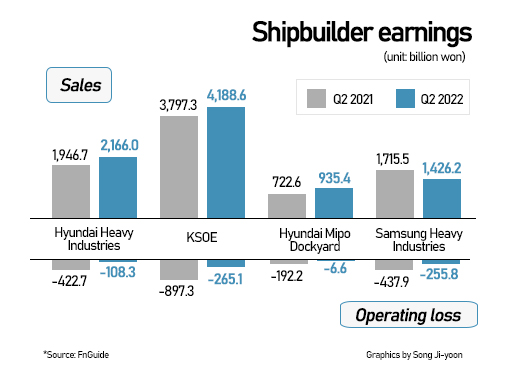 이미지 확대
South Korean shipbuilding stocks are on a rebound as second-quarter statement of shipbuilding majors flagged earnings improvement from rising backlog in high value-added vessel orders that have been flooding in since late last year.

The rally comes on growing expectations of profits in the statements in the second half and onwards.

Despite winning streak in orders, shipyards stayed in the red in the second quarter, although losses eased.

Hyundai Mipo Dockyard logged 6.6 billion won in losses in the April-June period, most close to a profit in the next quarter.

The improved earnings were in line with the market consensus. The vessels delivered in the second quarter were those won in 2020 before surge in vessel price. Brokerages projected that the shipyards will be able to turn to profit from the third quarter on a rise in production of high-priced vessels.

“The price of vessels won by local shipyards has soared sharply from last year,” said Uhm Kyung-ah, an analyst at Shinyoung Securities. “Total order has also increased from last year. Shipyards will be able to turn to profit soon on a rise in delivery and product unit cost.”

The softening in the price of thick steel plates and strong U.S. dollar would add to the upside to the bottom line.

According to Korea Mineral Resource Information Service, the price of iron ore, a key raw material of thick steel plates, stood at $110 in July, up 25 percent from $90 in November last year.

Thick steel plates account for 20 percent of vessel production cost. The price is determined by shipbuilders and steel industry twice every year.

“Unlike in the first half, the price of thick steel plates will likely stay the same or soften in the second half,” said Kim Yong-min, a researcher at CAPE Investment Securities. “Favorable exchange rate also will serve builders well.”