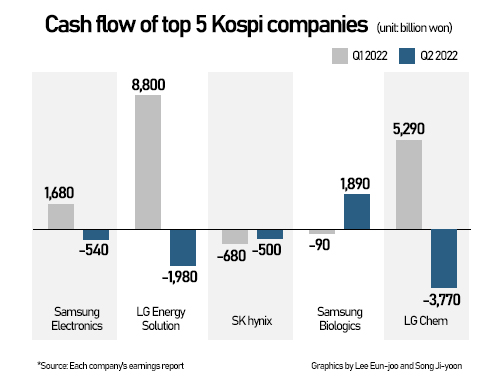 이미지 확대
South Korea’s five largest companies by market capitalization in the main Kospi market have lost 20 trillion won ($15.3 billion) in their cash flow in the second quarter from the previous three-month period amid deteriorated earnings and fund-raising conditions.

The analysis showed that the companies saw a net cash outflow of about 13 trillion won in the second quarter, when counting out 7 trillion won in loans that were not spent in the first quarter.

A company’s cash flow is a key index that measures financial soundness. It reflects a company’s ability to carry out investment or repay debt. The bottom line could suffer due to higher financing costs, further eating up the cash ammunition.

The top five Kospi companies spent 23 trillion won in capital investment in the second quarter, down from 24.81 trillion won in the first quarter. Samsung Electronics and Samsung Biologics upped capex by 2.88 trillion won and 960 billion won, respectively, but others cut back.

Cash flow from operations at the five companies declined except for Samsung Electronics, the analysis showed.

LGES blamed Covid-19 lockdowns across China and prolonged global supply disruptions for the weakened profitability in the second quarter despite higher revenue.

By Kang In-seon and Lee Eun-joo