Major logistics centre developing in the south of HCM City 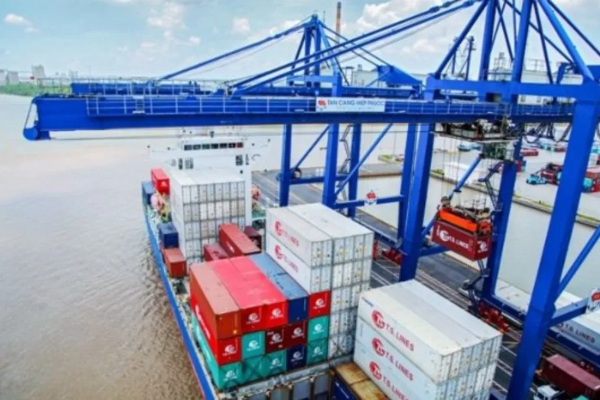 HCM CITY — With the advantages of geographical location and investment plans for land around ports, the 17-hectare Tân Cảng-Hiệp Phước (TCHP) Port situated in HCM City’s Nhà Bè District has huge potential to become a logistics centre in the south of the city.

Saigon Newport Corporation, the port’s operator, said it was investing more into the port, including in 300 hectares of storage space, container terminals and a general port.

About 10km from the city’s centre, the port is located at Hiệp Phước Industrial Park and close to client warehouses such as Lotte, Alpha, Dory warehouses and Saigon Food factories.

It is the only port operating container cargo in the south of the city, and is considered the best "extension arm" for Cát Lái and Cái Mép port clusters in Bà Rịa-Vũng Tàu Province.

With roads connecting to various industrial zones, the port connects these zones with terminals in the Cửu Long (Mekong) Delta.

Located on the Soài Rạp River, the port’s main berth length is 420 metres with two container berths and four barge berths, and is capable of receiving ships of up to 50,000 DWT.

It receives vessels from seven international shipping routes and one domestic route weekly.

It provides optimal time and cost advantages when bringing vessels into the port, such as no limit time for early dropping off, free storage, free barging between TCHP and Tân Cảng - Cát Lái (TCCL) Port, free barging for empty containers from TCCL to TCHP for stuffing and loading onto vessels at TCHP, and free 12-hour operation charge for reefer containers dropped at TCHP then transported and loaded at TCCL.

Additionally, its seven pairs of buoys on the river are capable of receiving vessels of 30,000-40,000 tonnes.

With modern equipment, the port also operates numerous bulk cargo and general cargo services for items such as rice, seafood, fertilizers, iron and steel, gypsum, cement and OOG project (wind turbines), with a productivity of over 350,000 tonnes per year for major consumers and partners.

Along with exports of Việt Nam`s essential products, it is becoming a hub of goods, a convenient place for goods clearance in the key southern economic region and the Mekong Delta.

Due to the demands of the ocean freight market, it welcomes primary shipping lines such as COSCO, TSL, WANHAI, OOCL, and ONE.

As a robust backend for logistics activities in the south, the port contributes to leveraging breakthrough opportunities for urban economic growth in Nhà Bè District.

Furthermore, this is the company`s vision for the potential development of Nhà Bè District into a "satellite city" from the perspective of a leading port and logistics enterprise in the country.

This orientation aligns with the city’s development plan for the logistics industry by 2025 with a vision to 2030, the city`s vision also follows the world`s trend in developing a logistics centre connecting port operations to maximise the potential in the logistics chain.

The district plans to retain Hiệp Phước Logistics Centre on a scale of more than 250ha as a distribution hub for e-commerce and domestic goods.

According to the country’s master plan for seaport system development in the period of 2021-2030 with a vision to 2050, the development orientation of seaports in the city is to shift the cargo flows out of the central area, connect the Mekong Delta and Cái Mép port cluster in Bà Rịa-Vũng Tàu Province, and develop large-scale ports to receive transhipment flows from neighbouring regions.

With a convenient location on the world`s maritime route, HCM City is working on a logistics development strategy that would make the city a major logistics hub of the country and Southeast Asia.

It aims to develop three logistics centres: one each in its south and north and one for aviation. The former two are expected to be at least 40 hectares in size by 2025, expanding to 70ha by 2030.

It also targets annual growth of 25 per cent for the logistics industry and for it to account for around 10 per cent of its economy. — VNS