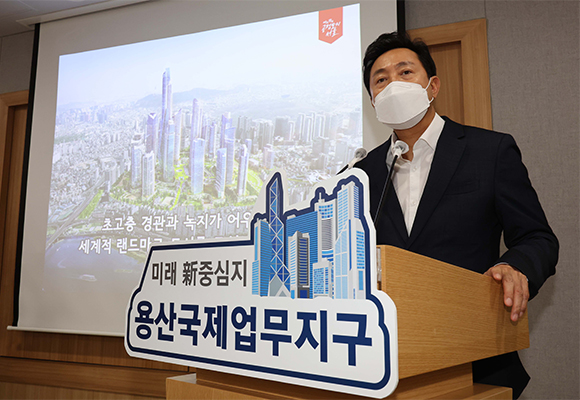 The Seoul Metropolitan Government has unveiled an ambitious plan to turn a massive idle land near Yongsan Station in central Seoul into the “Asian Silicon Valley” with global high-tech firms, residential units and skyscrapers potentially taller than Lotte World Tower.

The city authorities prospect that skyscrapers taller than 555-meter Lotte World Tower, the tallest building in Korea, can be built in the Yongsan area with minimized building height restrictions. Under the current law, the maximum allowable floor area ratio is 1,500 percent or beyond.

Hudson Yards in New York, which is similar to the Yongsan area, allows a floor area ratio of up to 3,300 percent, with the current average at over 1,800 percent, said the Seoul city government, adding that there will be no limit on the number of floors due to potential security threat to the presidential office near the site.

According to the city’s new vision, around 70 percent of the buildings in the district will be used for non-residential purposes with a total of 6,000 housing units. The area will accommodate commercial venues for MICE (meetings, incentives, conferences, and exhibitions), as well as hotels, e-sport facilities and other cultural facilities to satisfy the area’s role as a multifunctional city with both work and residential functions.

The district also will have international schools and relevant education infrastructure, as well as hospitals for foreigners to help foreigners settle down.

The city government said it will divide the area into different sectors for separate development to reduce urban development risks.

By Park Joon-hyung and Minu Kim