The South Korean economy added 0.7 percent in April-June period from the previous quarter despite reduced exports on the recovery of consumption from the lifting of Covid-19 social distancing rules.

According to the Bank of Korea (BOK)’s guidance for April-June gross domestic product (GDP) Tuesday, the country’s economy has been projected to have grown 0.7 percent on quarter, edging slightly up from a 0.6 percent gain in the first quarter.

The economy has been on fragile recovery after contractions in the first half of 2020, the onset of the pandemic outbreak. It rebounded 4.1 percent on year in 2021. This year’s growth rate has been projected to underperform earlier estimate of 3.0 percent due to worsening trade from spike in commodity prices amid protracted Russia-Ukraine crisis and inflation-hit global economy.

The BOK in June forecast annual growth could meet revised target of 2.7 percent for this year if the economy added 0.5 percent in the remaining quarters. 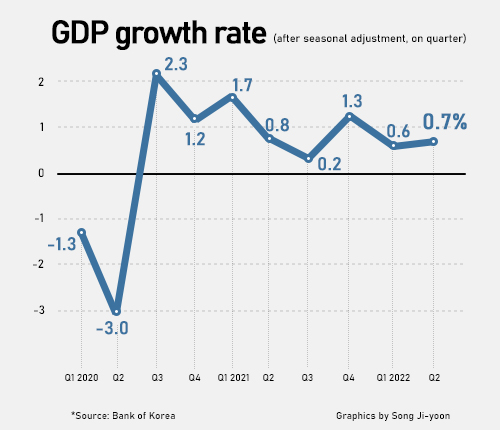 이미지 확대
From a year ago, the economy added 2.9 percent in the second quarter, slowing from 3.0 percent growth in the first quarter.

Private consumption rose 3.0 percent on quarter in the second quarter on pent-up spending in semi-durable goods like clothing and shoes and at restaurant and accommodation and entertainment after business restrictions and hours were fully lifted on easing in virus spread. 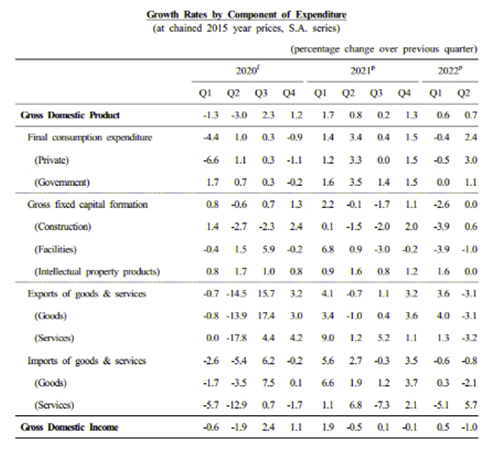 Exports that primarily led growth in the first quarter and past year fell 3.1 percent in the second quarter, the lowest since the second quarter of 2020, due to a fall in outbound shipments of primary chemical and metal products. Imports declined 0.8 percent on quarter.