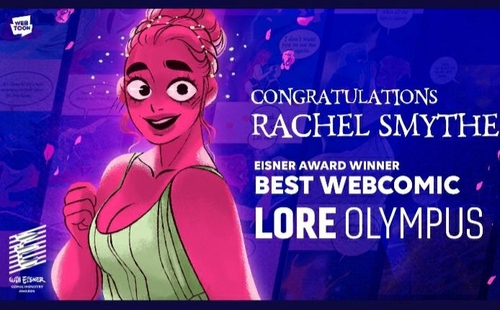 Lore Olympus – created by New Zealand artist Rachel Smythe - is a modern retelling of the Greek mythology about Hades and Persephone in a romantic fantasy setting that was published weekly starting March 2018 on WEBTOON.

In 2020, it became available in Korean and was later translated to six different languages including Japanese, Spanish, French, and Germany, accumulating over 1.2 billion views.

Lore Olympus boasts a total of 5.8 subscribers including 5.4 million from North America and 1.4 from South America and is the most popular comic on WEBTOON.

Lore Olympus’ win at the 2022 Eisner Awards, known as the “Academy Awards” of comic books, follows various other accolades such as the prestigious Harvey Award last year after it was previously nominated for an Eisner Award in 2019 and a Ringo Award in 2021. Lore Olympus Volume 1 also reached #1 on the New York Times Best-Seller list in November 2021 and was one of NPR’s critics’ recommendations during the same year.

Lore Olympus was first launched through Naver WEBTOON’s CANVAS, the webcomic industry’s first free self-publishing platform created to discover new webcomic artists. CANVAS currently plays a critical role in expanding the webcomic market with its 750,000 webtoon artists from all around the world.

Lore Olympus victory suggests the growing influence of WEBTOON across the world.

“As one of Rachel’s biggest fans, I am thrilled to see her work and vision recognized with this award, which is the latest example of what we already know at Webtoon: WEBTOON creators are the most exciting and innovative comic creators in the world,” Ken Kim, CEO of WEBTOON Americas, said in a press statement on Saturday.

WEBTOON first made its foray into the overseas markets through an English webtoon platform “Line Webtoon,” renamed WEBTOON, in July 2014. In December 2019, it became the first Korean webtoon platform to enter the European market with various works translated into Spanish, French, and Germany.

WEBTOON is now available in more than 100 different regions in 10 languages including Chinese, Japanese, Indonesian, and Thai.